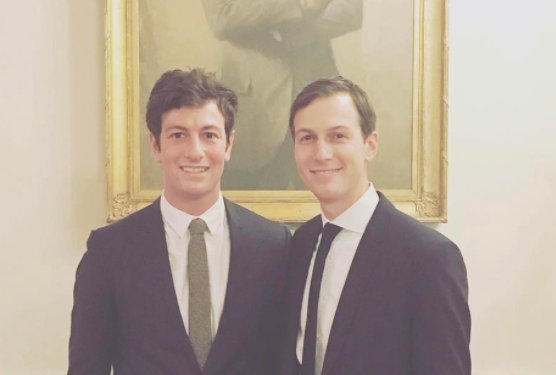 When 31-year-old Josh Kushner learned his brother’s father-in-law had defeated Hillary Clinton in the 2016 presidential election, he was sitting in coach on a Virgin Airlines plane watching the results on his seat back television set.

“I was surprised,” he tells Forbes in a new profile. “But not as surprised as the other passengers sitting around me.”

Suddenly, he went into crisis mode.

Josh is the younger brother of Ivanka Trump‘s husband, Jared Kushner, and a lifelong Democrat. He’s also the co-founder of Oscar Health, a multi-billion dollar start-up aimed at helping millennials acquire health insurance under the Affordable Care Act, which Donald Trump wants more than anything to abolish.

“It is no secret that liberal values have guided my life,” Josh, who has always considered Trump’s foray into politics nothing more than an ego-trip, continues, “and that I have supported political leaders that share similar values. Just as Jared is my family, I feel similarly responsible to everyone at my companies.”

But it wasn’t only his business interests Josh was concerned about. He says he was genuinely concerned for the country.

A recent profile in Hollywood Life mentions that Josh not only voted against Donald Trump in the election, but he’s a vocal supporter of equal rights for everyone.

For instance, he attended the Women’s March in Washington, D.C. on January 21; however, when someone snapped a photo of him among a sea of pink p*ssy hats and asked what he was doing there, Josh said he was simply “observing,” stopping short of criticizing his brother’s father-in-law. Still, actions speak louder than words, right?

Oh hey, it's Jared Kushner's brother at the #WomansMarch pic.twitter.com/Zln3So53oa

Then just last week he posted this on Instagram:

Oh, and he’s been dating 24-year-old supermodel Karlie Kloss, a vocal feminist, for the past five years.

We think it’s safe to say that, unlike his brother’s father-in-law, Josh doesn’t think it’s OK to “grab women by the p*ssy.”

According to Josh, he and his older brother remain close, despite their political differences.

“Jared and I still speak every day,” he says, though Forbes mentions he won’t elaborate on what exactly they discuss or even what their dynamic is like.

And, yes, he’s visited him in Washington, D.C. a few times, too.

But according to folks who are close to Josh, he doesn’t share his older brother’s political aspirations, and he has made a point to distance himself from the Trump administration. At least, for now.