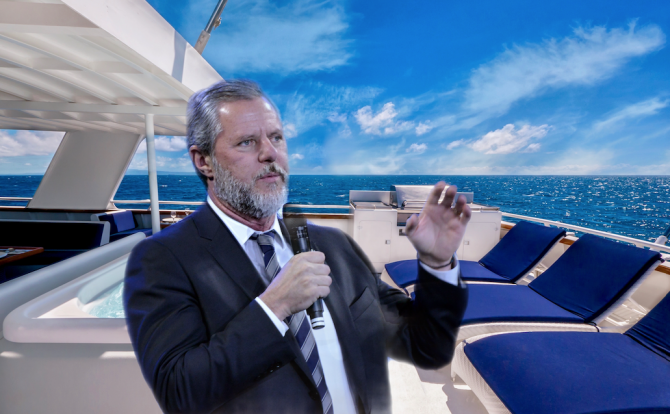 Oh what a week it’s been for Jerry Falwell Jr., culminating in the late-Friday development (you know, when the embarrassing news gets swept under the rug)  that he’s agreed to take “an indefinite leave of absence” as the president of Liberty University.

Falwell Jr.’s reputation as a party boy living a decidedly non-Christian lifestyle, despite heading the evangelical college in Lynchburg, Virginia, finally caught up to him when he was caught quite literally with his pants down.

On Monday, Falwell Jr. inexplicably posted a photo of himself with a woman who is not his wife, both with their pants undone, partying on a yacht.

The caption read: “More vacation shots. Lot of good friends visited us on the yacht. I promise that’s just black water in my glass. It was a prop only.”

Within minutes, Falwell Jr. deleted the image. But not before someone captured a screenshot of it, ensuring its internet immortality.

Falwell Jr. later apologized, explaining it was just a “costume party” and “in good fun.” And sure, it may have been both of those things for someone not trying to maintain a public facade of virtuous (not to mention virulently homophobic) Christianity.

The photo–and subsequent video–were apparently too much for the Liberty Board of Trustees, who announced:

“The Executive Committee of Liberty University’s Board of Trustees, acting on behalf of the full Board, met today and requested that Jerry Falwell, Jr. take an indefinite leave of absence from his roles as President and Chancellor of Liberty University, to which he has agreed, effective immediately.”

Falwell Jr. is the son of the late Reverend Jerry Falwell, the ultra-conservative televangelist who founded the university.

Falwell Jr. was also one of the first evangelical higher-ups to endorse Donald Trump during his bid for the 2016 presidential nomination.

Subscribe to Queerty for a daily dose of #life #jerryfalwelljr. #religion stories and more