This week we caught up with the great John Cameron Mitchell…on a desert island.

The classy, artsy maverick filmmaker of course earned his fame by directing and starring in the title role of film version of Hedwig and the Angry Inch, a role he created in the original stage production. Following the success of that film, he opted to focus on his directorial career, helming the indie features Shortbus, Rabbit Hole and How to Talk to Girls at Parties. The acting bug bit him again in 2015 when he returned to the role of Hedwig in a Broadway revival of the show, for which he won a special Tony Award. He subsequently kicked his acting career into high gear in front of the camera as well, landing roles in Girls, The Good Fight and Mozart in the Jungle.

Now Mitchell returns to the screen again in Season 3 of Shrill. The Hulu comedy arrives on May 7. The new season sees Mitchell return to the role of Gabe, a self-absorbed magazine editor and boss from Hell to Annie (Aidy Bryant). This season sees Gabe publish his own book proclaiming himself an activist hero, and continue to crush the souls of his various magazine employees.

Despite John Cameron Mitchell lounging on the aforementioned island–and with terrible WiFi–we managed to get a conversation in to talk about Season 3, working as an out-queer actor in Hollywood, and his current side projects. Shrill returns to Hulu May 7.

They tell me you’re in Mexico. You’re vacationing?

I am. I’m killing ants in my bed. I came for my birthday. It’s wonderful. I’m on the island of Holbox. It’s gorgeous.

Sorry about the ants. Happy you’re traveling though. I hope you’re vaccinated.

Gabe, your character, takes boss from hell to a new level. Do you see him as a sadist? Or is he just that oblivious?

I think he’s more oblivious and inconsiderate. He’s my worst gay boss nightmare. I mean, I guess it could be worse. He could be Joe Exotic. But there’s a sense of everything I wouldn’t do as a boss happening there. Being a film director I’m very careful about how I work, everyone’s feelings, and how I delegate work, knowing everyone’s names. Gabe does the absolute opposite.

He pretends to be a man of the people, but he’s not consistent. I’d rather have a boss that’s “The Boss” not pretend to be my friend.

I can’t help but notice black and silver seem to be his colors. Was that your idea, or the costume designer? How does that inform the character, or what it it supposed to intimate?

He doesn’t believe in gray. Everything is black and white. There’s no nuance in his house. You’re either with Gabe, or you’re against Gabe. And you know, I love dualism—the two halves. I actually got this hair doing Mozart in the Jungle. I kept it because it felt like a nice kind of signature. It’s nice that it worked for Gabe and a few other roles I’ve played. It won’t work for Joe Exotic.

Related: Why Did David Letterman Refuse To Shake Hands With John Cameron Mitchell?

And we can’t wait to see you as Joe Exotic. Let’s talk a bit about acting styles. You’re working with Aidy Bryant and Fred Armisen this season, both of whom are SNL vets. Do you improvise together? Because all three of you have a theatrical background in some sense, does that make it more fun?

It does. I came from a background in theatre where you weren’t allowed to improvise. Friends forced me into the Mee-Ow Show at Northwestern University in Chicago. It’s like the pre-Second City show. Chicago is a comedy town. So I admire musicians but also stand-up comedians. In essence, they’re writing, editing and performing their own little film, their act. They are fully in control of it, and able to improvise. I’m so envious of that. In a way, writing Hedwig allowed me to be a fake stand-up comedian, a fake drag queen, a fake rock star, and to do all those things those people do. But I don’t have to tour, and I can work on those chops without the downside.

When you do a play and have eight shows a week, you know where you’re supposed to be. So Fred and Aidy, Amy Pohler, Kate McKinnon—these people are my heroes. In comedy—comedy is a great gift because it makes you lower your guard and let so many things in. My favorite brand of comedy is corrective for a world that’s troubled. It shows the absurdity and the justice. That’s the danger of PC policing—you’ve got to have a sense of humor. I was thrilled to be surrounded by stand-up comedians in Shrill and learn from them. And we were always allowed to ad-lib a bit.

I want to ask a bit about your career. I know after the Hedwig movie came out you eschewed acting for a while. What kind of parts were you offered after playing a transsexual—or a character perceived as transsexual—rock star?

Well, early on, I decided I don’t care what Hollywood thinks of me. I do care how people relate to my work, and how they take it. That’s important. In terms of how I’m seen: I don’t want to be seen as an assh*le. I mean, I’m not one. But from the very beginning, I was always outside the system. I was openly gay in Hollywood in the 80s. My first action movie, Band of the Hand, I made sure everyone knew I was gay so there wouldn’t be the usual homophobic remarks among the crew.

I let it be known, and it went away. So for me, AIDS was a defining part of my life. I came out into it, and it was a matter of life and death. Hollywood, the closet—all these things seemed silly, negative and stupid. So I think you can be out without being didactic. You can tell stories about people you don’t know about—you learn about them and work your own empathy. That’s the point of stories. Otherwise, we’d just have autobiographies. The point of fiction is to identify with someone you are not. I had nothing in common with Hedwig, except how I felt. 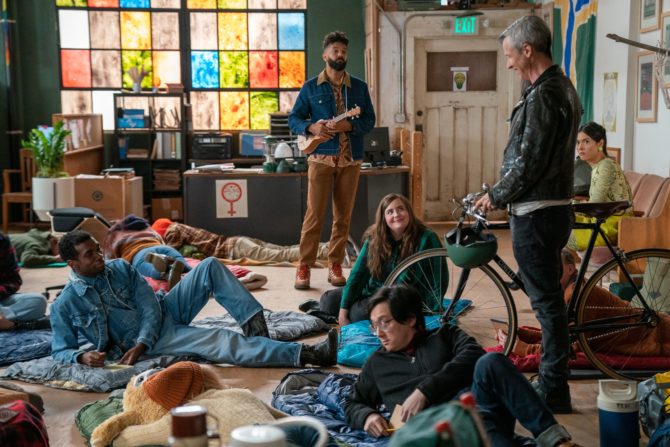 You mention the character as being transsexual; I don’t see the character as trans. He was quite comfortable with his genitals [before being forced to have a botched surgery to emigrate]. So, in a sense, he’s a victim of the patriarchy and the biarchy—being told you need this to be a man, you need this to be a woman. In a way, it’s about love and seeking your other half, by the end you realize it’s about finding your gender of one. It’s about finding yourself.

So I need to ask you about two specific projects. One is Anthem: Homunculus. Would you ever do it as a stage musical?

Yes, we did have some thoughts before COVID about taking it to the stage, to Broadway. That’s still not out of the equation. There’s just a huge backlog of shows now, and that’s going to take a while [to get through].

That’s wonderful. What about Hedwig 2?

Well, Anthem: Homunculus originally was Hedwig 2. Originally it was Hedwig with a brain tumor crowdfunding her healthcare. But my composer wasn’t really into bringing her back. And the story was really more about me and my family—autobiographical up to the point where I don’t leave for college. It’s a “what if” I never left my small town and came out. It’s my relationship with God and death and love which has tormented me my whole life.

Shrill arrives on Hulu May 7.