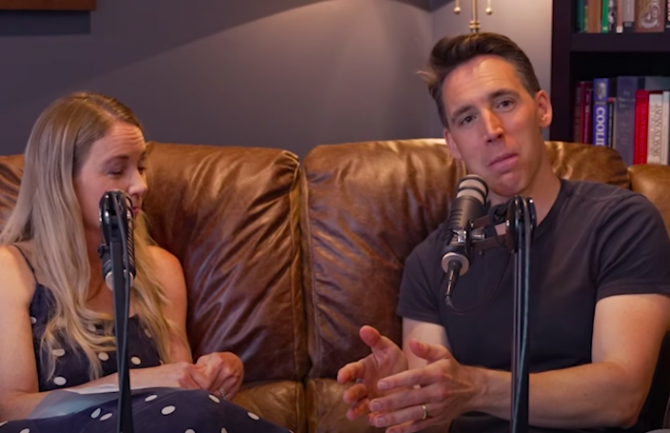 Sen. Josh Hawley is a busy man. In addition to allegedly plotting insurrections, laying the groundwork for a potential 2024 presidential run, railing against big tech, and pushing an anti-LGBTQ agenda in the U.S. Senate, he’s somehow found the time to launch a new podcast with his wife, Erin.

“Big news from the Hawley family,” the antigay senator tweeted on Monday. “Erin and I have a new podcast, and it launches today! It’s called This is Living. It’s about our life together, our family & faith, and the things that matter most.”

A super basic straight white cisgender couple talking about family and faith. Sounds boring as hell to us.

Big news from the Hawley family: Erin and I have a new podcast, and it launches today! It’s called This is Living. It’s about our life together, our family & faith, and the things that matter most. Available on Apple, Spotify, and many other places. https://t.co/5rAGE4KxxD

Now, most people are already familiar with Hawley.

First, there was his alleged involvement in the January 6 insurrection that got a lot of attention earlier this year. Then in March he was the subject of a New York Times investigation that included interviews with more than 50 people who were once close to him–including his high school prom date, middle school principal, and a Black classmate he used to bully.

The article also included a revelation about a poster of a half naked man Hawley allegedly kept hanging in is college dorm room at Stanford:

Above his bed he hung a sepia-toned poster of a shirtless male model cradling a newborn; when asked by classmates, he said it reflected his fervent stance against abortion.

When asked for comment on the homoerotic image, a spokesperson for Hawley said it was “not something he remembers.”

Related: Josh Hawley can’t remember if he had a poster of a half naked man hanging above his bed in college

As for Erin, she’s less of a public figure, although she’s made a few headlines herself.

In addition to having ties to the antigay hate group Focus on the Family, in February, she filed a criminal complaint against the organizer of a peaceful protest outside the Hawley’s suburban home near Washington, D.C. shortly after the insurrection.

She was alone with the couple’s new baby when a dozen or so people gathered in the street outside. Most of them remained off the property, although at one point a group of about four people calmly approached the front door and rang the bell before leaving behind a copy of the U.S. Constitution.

Afterwards, Erin told police was a “frightened” and that the protestors shouted “threateningly.” Multiple videos taken that evening, however, did not support her claims.

Speaking to Fox News, the Hawleys say their new podcast won’t be about politics. Instead, it’ll be about their boring heteronormative lives, marriage, children, and, of course, God.

“We thought it’d be really fun to do something together and to maybe pull back the curtain a bit on our lives and our family life and just the day-to-day living that we do,” Josh says.

“It’s about being intentional in marriage and how to raise kids and have that so-called balanced life with career and children and all those sorts of things,” Erin adds.

Here’s how Twitter is responding to Hawley’s new podcast…

No Person shall be a Senator or Rep and in Congress, or elector of President and VP who, having previously taken an oath to support the Constitution of the U.S., shall have engaged in insurrection or rebellion against the same.

Do you talk about your love of neo Nazis, domestic terrorists, and deadly insurrections?

I know I’m tuning in for the episode on love! pic.twitter.com/zczr1NyrcI

Will you discuss the challenges of living in one state while representing another illegally?

Ya gonna discuss your role regarding Jan 6? pic.twitter.com/rAqP8JnOoX

Will you be covering top tips for an insurrection? What to eat, what to wear, what weapons to use?

“It’s about white Christian Nationalism, but there are already a bunch of podcasts called that, so we went with ‘This is Living’ instead.”

I’d rather hear about faith from someone who actually demonstrates fruit of the spirit not the spirit of hatred and selfish ambition.

Christ I could not dream up a more boring podcast than this.