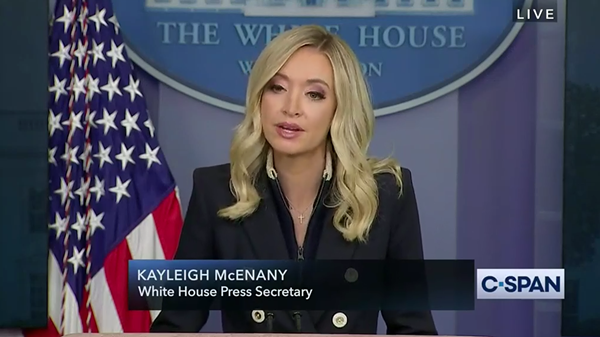 Kayleigh McEnany seems to be adapting well to her job as White House Press Secretary. She has perfected the art of lying with a straight face. Now, she’s working on her spin.

Speaking to reporters yesterday, McEnany pushed back against claims that Trump was “hiding” from responsibility Friday evening when all the lights were turned off at the White House and he was locked in an underground bunker as protestors gathered outside.

“He was literally put in a bunker Friday night by the Secret Service,” a reporter said. “Would you agree that he is hiding out on this issue and is that a good posture to be in?”

“I would not agree with that at all,” McEnany replied without denying that Trump did, indeed, spend part of his weekend in a bunker that was designed for things like terrorists attacks and nuclear bombs.

She went on to say that she talked with Trump on the phone “at least half a dozen times” on Sunday, then she praised all the “action” he’s taken against protestors.

“Where the governors have failed, he’s stepped in,” she claimed.

“Make no mistake, this president has not been silent,” McEnany insisted, “and at this moment he is acting to protect this country from the lawlessness we saw just out here in Lafayette Park last night.”

Reporter: "There is a perception that the President is hiding in the bunker… Would you agree?"

Press Sec. Kayleigh McEnany: "I would not, I would not agree… This President has been leading." pic.twitter.com/L2OoDNdgoe

Kayleigh: And we also note the President’s history of condemning white supremacy and racism pic.twitter.com/ofZ6P6cEZW

Related: Twitter drags Trump for cowering in a bunker during George Floyd demonstrations