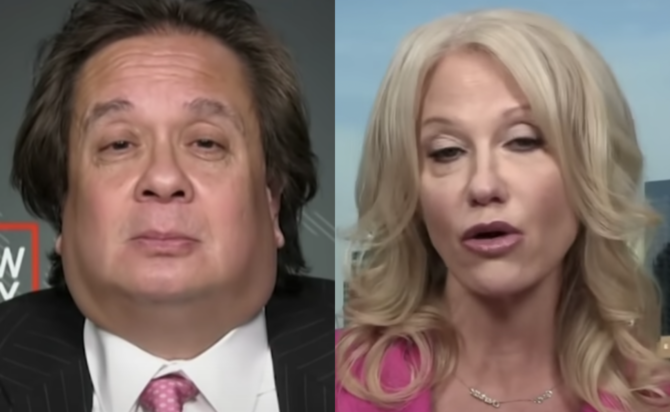 Everyone’s trolling Kellyanne Conway over a tweet she wrote in 2016 following an appearance on Fox News and even her future ex-husband George is getting in on the action.

“Most honest people I know are not under FBI investigation,” the former White House propagandist tweeted on October 28, 2016, “let alone two.”

She was referring to the FBI’s investigation of Hillary Clinton’s use of a personal e-mail system during her time as Secretary of State, which ultimately found “no persuasive evidence of systemic, deliberate mishandling of classified information.”

What say you now @KellyannePolls ? pic.twitter.com/bPZL1r21dj

The tweet obviously hasn’t aged well after Donald Trump, the one-term, twice-impeached ex-president and Kellyanne’s former boss, had his home in Palm Beach, Florida raided by the FBI yesterday morning as part of an investigation into the alleged mishandling of presidential records, including classified documents.

This is in addition, of course, to the Justice Department’s probe into the effort to overturn the 2020 presidential election and the January 6 insurrection, of which Trump may or may not be at the center. The DOJ has remained tight-lipped about that investigation, although it has been reported the ex-president’s lawyer is in communication with investigators.

Meanwhile, George Conway has been trolling the disgraced ex-president nonstop since yesterday’s raid:

A belated Happy Mar-a-Lago Search and Seizure Day to all who celebrate!

Please retweet if your home or office wasn't searched today by the Federal Bureau of Investigation pursuant to a warrant issued by a federal judge upon a showing of probable cause.

George also appeared to troll his own future ex-wife by tweeting the exact same thing she tweeted back in 2016:

During her book tour earlier this summer, Kellyanne talked about her failed marriage and how she often felt George violated their wedding vows when he spoke out against Trump on social media.

“I lost my husband to Twitter,” she told the New York Post in May. “George and I … always took our marriage vows very seriously. We are faithful in our marriage.”

When asked if they were still together, Kellyanne simply replied: “We’re married.” She later implied that they were living apart.

Related: Kellyanne Conway’s husband walks out, “wants nothing to do with our family,” daughter claims