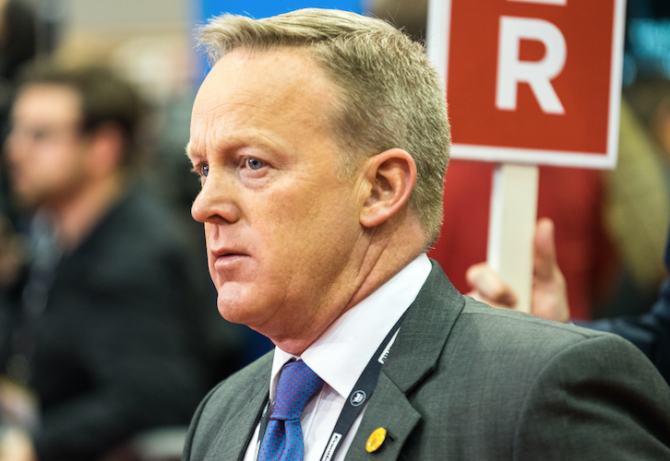 In the beginning, Trump created a deplorable administration and shady cabinet.  And the press said, “Let there be leaks,” and there were leaks.

Leaks about light switches, about Australia, about executive orders that weren’t ready for prime time. And leaks about so much more.

So now it seems only fitting that we’ve come full circle: The latest White House leak is, of course, about leaks.

Upset by all the unflattering news citing anonymous White House sources (remember: “the leaks are real, the news is fake”), White House press secretary and Melissa McCarthy impersonator Sean Spicer has reportedly gone all middle school principal on his staff.

Without notice, they were summoned to a meeting where their phones — personal and government issued — were confiscated and inspected for evidence of leaking to the press.

White House attorneys supervised the crackdown, and Politico reports they were looking for encrypted messaging apps like Confide and Signal. These apps, Spicer warned, could potentially violate the Presidential Records Act.

The emergency meeting was called after Spicer realized someone on his own staff had leaked information about a communications staff meeting. It doesn’t seem to be getting any easier for the administration to keep things under wraps.

It’s almost as if some people working in the White House feel they owe it to the American people to pull back the curtain on the dysfunction of the new administration. Go figure.

At his 2020 campaign kickoff event (ugh) in Florida two weeks ago, Trump said reporters “make up stories and make up sources.” “Let their names be put out there,” he said, arguing that the media shouldn’t be allowed to use unnamed sources. We won’t even begin to delve into why that’s an absolutely absurd position.

Other wings of the Trump administration have tried to squash leaks in their own way, including the State Department putting out a memo about the dangers of leaking.

That memo was promptly leaked and published by The Washington Post.

We’re now at the point where meta leaks are not just a thing, they’re a pattern.

Back in October of 2016, when leaks were harming Hillary’s campaign and increasing his odds of occupying the White House, Trump said at a rally, “I love WikiLeaks. It’s amazing how nothing is secret today when you talk about the Internet.”