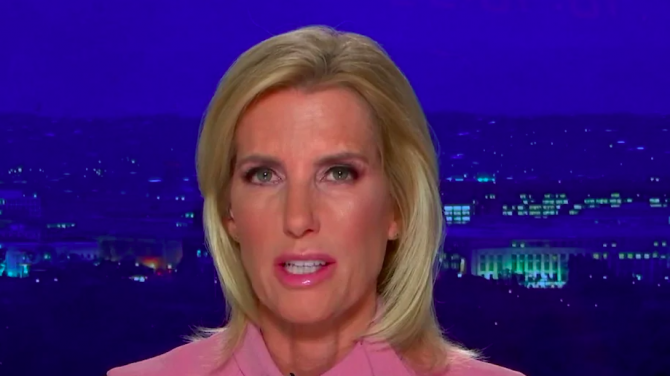 Fox News’ resident homophobe and professional liar Laura Ingraham did something usual (for her) during last night’s episode of The Angle: She told the truth. Not only that, but she encouraged her audience to believe it.

The tide is turning in America, folx!

Ingraham regretfully informed viewers that their messiah, Donald Trump, will no longer be president come noon January 20, 2021 after the General Services Administration signed off on the transition of power to the incoming Biden administration yesterday.

“Unless the legal situation changes in a dramatic and, frankly, an unlikely manner,” she said, “Joe Biden will be inaugurated on January 20.”

“To say this constitutes living in reality, and if I offered you a false reality, if I told you that there was an excellent, phenomenal chance that the Supreme Court was going to step in and deliver a victory for President Trump, I’d be lying to you.”

Trump will remain the most compelling voice in American politics after Biden is sworn in as president. pic.twitter.com/JpSiCiW2kl

“There is no reason that every state can’t be like Florida or Texas and call this thing on election night,” she continued. “This cannot turn out to be a permanent ‘find the votes you need’ game to bury Republicans. No way.”

Ingraham concluded by saying Trump is still the “most compelling voice in American politics,” adding that “this Thanksgiving, we should all be incredibly grateful for his service to our country and his sacrifices for this country.”

But not everyone watching appeared willing to accept what Ingraham was telling them. In fact, many became downright hostile towards her…

Same, she just ruined her credibility as a reporter. 😂

Somehow I have a feeling you’ll regret this one, Laura! It won’t age well.

Nope! Trump will succeed in reelection! Don’t dare to patronize us! Very disappointed!

Let’s watch her followers drop as fast as her ratings will too.

It is not over

Now that you and Tucker Carlson have thrown in the towel, I’m totally done with Fox News.

A little too much fillers and botox Laura, nice knowing you.

Sure. And Milli Vanilli sang on their albums.

I loved you on the radio. Fox has ruined you.

Sell out. Hope they paid you well. We the people will never forget.

Nice company you keep there, Laura! Be best!

Related: Uh-oh! Laura Ingraham’s lies are finally catching up to her