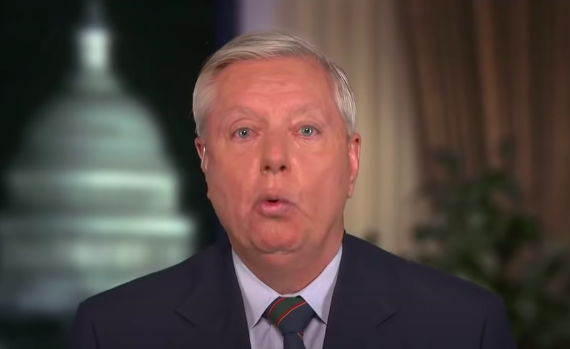 This just in: Lindsey Graham is about to go through some things.

This morning, Graham’s attorneys issued a written statement saying that he fully intends to fight the subpoena, calling the whole thing nothing more than a “fishing expedition.”

The lawyers go on to claim that they’ve personally had “conversations with Fulton County investigators” and have been told “Senator Graham is neither a subject nor target of the investigation, simply a witness.”

In today's episode of "The GOP is full of temper-tantrum-throwing children," Lindsey Graham threatens to hold his breath until he turns blue. pic.twitter.com/hZepqrX0oo

The special grand jury wants to speak with Graham about those two phone calls he made to Georgia Secretary of State Brad Raffensperger and his staff shortly after the 2020 election.

Related: Lindsey Graham just got dumped by Donald Trump after six years of passionate a** kissing

The filing also says Graham brought up accusations of widespread voter fraud, which have since been disproven.

“As chairman of the Senate Judiciary Committee, Sen. Graham was well within his rights to discuss with state officials the processes and procedures around administering elections,” Daniel and Austin write in their statement.

So far, Willis’ office has not commented on the subpoena or Graham’s intentions to fight it.

Here’s what folx on Twitter have to say about it…

A sitting US Senator was subpoenaed in a criminal racketeering investigation today and were all just kind of “what’s for dinner” about it.

Hope @LindseyGrahamSC has an action-packed 2022!

Lindsey Graham: it’s a subpoena, not a birthday invitation.

I’m betting Lindsey Graham did not have a good night of sleep last night.

If Lindsey Graham refuses to comply with the subpoena, he’s guilty.

Lindsey Graham hasn’t said a word since he was subpoenaed. No tweets. No Fox News appearances. No press releases. Just…silence. Lindsey must be repenting for his MAGA sins. He played with the MAGA fire, and he got burned. Suckered like the other 75 million gullible Americans.

Yes, a witness to the conspiracy he was a part of!

Lindsey Graham told us back in 2015 that he would be destroyed and would deserve it if his party supported Donald Trump.

“Let’s talk about the Lindsey Graham part of this,” CNN’s Brianna Keillar said. “You have a sitting senator who has been subpoenaed in this case. I mean, how big of a deal is that?”

“I think it’s extraordinary,” Roiphe replied. “I mean, this is not a usual case, of course. But in this particular situation, to subpoena somebody who is a sitting congressperson, you know, it’s significant and it shows how far-reaching this investigation is at this point.”

“Does that speech and debate clause protect him? Is that going to hold water?” Keillar then asked.

Both Honing and Roiphe agreed that Graham likely won’t be able to lean on congressional protections to avoid speaking to the grand jury.