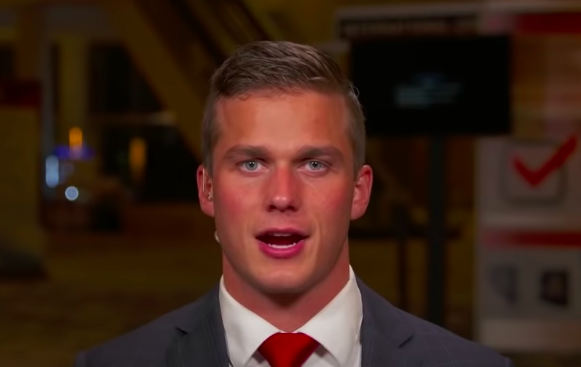 It’s only Tuesday and Rep. Madison Cawthorn of North Carolina is already having what is arguably the worst week of his career thus far.

First, Buzzfeed published a damning report about the homophobic lawmaker over the weekend in which more than 30 of his former friends, classmates, and acquaintances accused him of sexual harassment, misconduct, and other inappropriate behavior.

The accusations included things like calling the women derogatory names in public, interrogating them about their sex lives, forcing them to sit in his lap, grabbing and kissing them without their consent, and locking them in his car then driving them to remote areas.

Then the Washington Post ran a story claiming Cawthorn lied about that 2014 car crash that left him partially paralyzed.

Bradley Ledford, who pulled Cawthorn from the wreckage, opened up for the first time about the accident and offered a drastically different version of the story than what the young politician told people on the campaign trail last year.

Now, Cawthorn and his team are struggling to deal with the fallout from the onslaught of negative press.

Not only has his communications director, Micah Bock, set his Twitter page to private, but he’s absolutely failing in the damage control department.

Instead of, say, crafting a statement in response to the scandals or holding a press conference to try and clear up any misconceptions, Bock has been dodging requests for comments and instead referring media outlets to two random quotes Cawthorn gave last September while on the campaign trail:

On September 4th, 2020 Rep. Cawthorn responded to the questions you are asking, saying: “I have never done anything sexually inappropriate in my life”

As for Cawthorn, he hasn’t said anything about his PR nightmare on social media, nor has he given any interviews about it. Instead, he went on Fox News this morning to talk about… Dr. Seuss.

Seriously, folx, you can’t make this sh*t up.

Speaking to Fox & Friends, the 25-year-old railed against people trying to “cancel” the popular children’s book author. Evidently, that’s the most pressing matter on his agenda at the moment.

Madison Cawthorn was on Fox & Friends First for an interview this morning. He was never asked about the multiple sexual harassment allegations made against him, but he was given an opportunity to rail against the purported cancelation of Dr. Seuss. pic.twitter.com/fC0XpVj8Lg

Cawthorn clearly does not want to talk about the multiple scandals he’s currently embroiled in. Unfortunately for him, his name has been trending all day on Twitter.

Just so I understand: Madison Cawthorn would take girls on "fun rides" to sexually harass and assault them and then later a "fun ride" with his best friend paralyzed him?
And then he lied and said his friend abandoned him when in reality he saved him?

Can't make this up.

Raise your hand if you don’t want to hear another word about Andrew Cuomo until we start getting similar outrage and coverage of Madison Cawthorn. I’ll start.

wow i see madison cawthorn was on fox this morning after all the stories about him i wonder if they asked him ab—
oh pic.twitter.com/oazJjHL79v

Where are the calls for lying sexual predator Madison Cawthorn to resign?

Not only has GOP Rep Madison Cawthorn sexually harassed women on his "fun rides" he also degraded them on Campus. Unbelievably, he also lied about the accident that left him paralyzed. His own parents said he lied. But none of this matters to Repubs because he's one of theirs.

Found myself explaining to someone all the ways in which Madison Cawthorn is awful and throwing in "oh, and there's also some Hitler fetish stuff…" It was like the fifth thing on the list!

He is the perfect modern Republican. There is no other Republican party.

Is there anything Madison Cawthorn HASN’T lied about?

it makes sense that madison cawthorn would be the one Fox interviews about Dr. Seuss being that he still reads them and all

It's never going to get better until there is the same ire and accountability for Madison Cawthorn from both parties, as there is for Cuomo. Crickets right now on Cawthorn.

I enjoy seeing Madison Cawthorn exposed as much as the next person but I have to wonder why this dime store Tom Brady doppelganger's skeletons are only really coming to light after he's in office. Can we stop the next guy before he's elected, please?