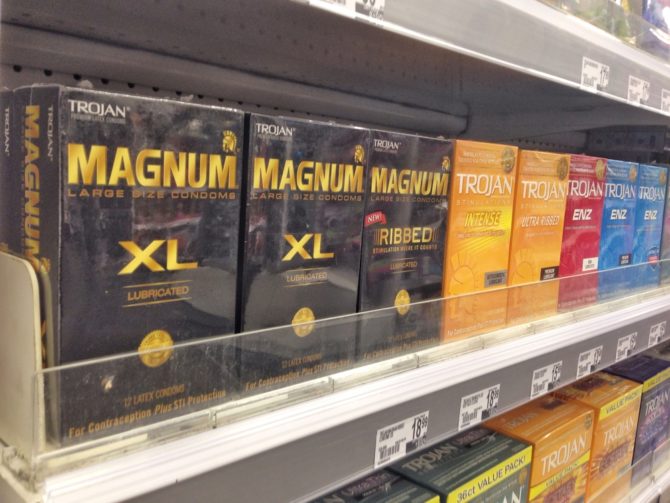 Jamie Lawson is an openly gay anthropologist focused on sex and sexuality at the University of Bristol. He recently swung by his local drug store to pick up, among other things, condoms and lube.

He located the items in their usual spot: the “family planning” aisle. Evidently, as he was trying to decide between ribbed or smooth, he had an epiphany.

Hey @sainsburys can we talk about how unfit for purpose and excluding this signage is? pic.twitter.com/3zFx9kYdFn

Unfit and excluding? What?

“I am a gay man; the sex I have is non-reproductive by definition,” Lawson tell Mic, adding that buying condoms and lube in the family planning section makes him feel “self-conscious in a way that heterosexual people [aren’t].”

Condoms can, of course, be used for family planning — the intentional taking of steps to control the number of children you will have and when you will have them. Condoms are also a handy barrier to sexually transmitted infections; lube serves little contraceptive purpose, other than making sex more pleasurable. Classifying both items — along with the vibrators and small toys that increasingly occupy those same shelves — as “family planning” tools seems both categorically incorrect and an attempt to euphemize what they are actually used for: sex.

The drug store responded to Lawson’s tweet by explaining exactly why it uses the words “family planning”:

Hi Jamie. The category has historically always been called Family Planning. It has always been felt that using the…1/2

…word ‘sexual’ could cause offence or embarrassment to some customers. Sam. 2/2

But Lawson was not satisfied with that response.

Here’s the thing: There are various reasons why a person might have sex, among them things like “having fun”, “earning a living”, “a strong desire to have an orgasm”. Sometimes, people might have sex specifically because they want to make a baby, but more often than not, that is not why people have sex.

Therefore, he believes, the sign should be changed to something more accurate so as not to come across as homophobic.

“Because let me tell you,” he wrote, “there are quite a few of us for whom sex has nothing to do with reproduction at all.”

Speaking again to Mic, Lawson says he thinks terms like “sexual well-being” would be a better phrase for drug stores to use because, he says, it “captures everything.”

What do you think? Does Lawson have a point or is he making much ado about nothing?