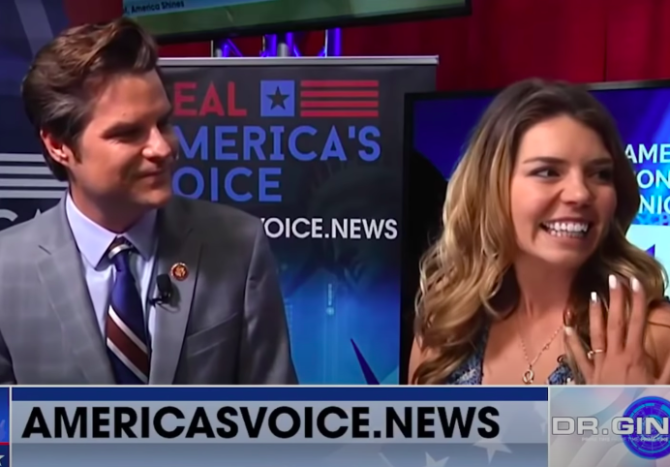 Matt Gaetz‘s fiancée, 26-year-old food analyst Ginger Luckey, wants everyone to know that she’s standing by her man no matter what.

On Friday, Luckey retweeted a photo of herself and Gaetz along with a quote from a QAnon meme Donald Trump shared on Twitter last year.

“They’re not coming for me, they’re coming for you. I’m just in the way” @mattgaetz https://t.co/5eiTBLNYQ3

WTF is she even talking about, you wonder? Good question. But it’s clear Luckey has no plans on calling off her wedding to the antigay congressman from Florida, even as the evidence against him keeps piling up… and up… and up.

The latest development in the case is a string of leaked WhatsApp chats between Gaetz’s friend/alleged pimp Joel Greenberg and another mutual friend of theirs talking about paying the legal fees for the 17-year-old, who they refer to as “vintage 99” (a fine-wine reference to the year she was born), to prevent her from talking to the feds.

Gaetz, who is now the subject of a House Ethics Committee investigation into his alleged sexual misconduct, has denied any wrongdoing and just hired two very high-profile attorneys, Mark Mukasey and Isabelle Kirshner, to defend him.

Related: Glenn Greenwald is being dragged for suggesting Matt Gaetz has a right to commit statutory rape

He and Luckey first met in March 2020 at a Trump fundraiser held at Mar-a-Lago. They were engaged just a few months later during a New Years Eve party at the club.

Luckey later told the Daily Mail that her response to Gaetz proposing was, “Duh!” She also said the couple planned to tie the knot sometime before 2024, but that they had not yet set a date.

And now, the responses to Ginger’s “they’re coming for you” tweet…

Nah they’re after Matt for the underage rape stuff

Actually Ginger, I’m pretty sure they are coming for Matt, NOT me.

Oh girl. Those red flags are up. Please pay attention to them.

Yeah, most of us didn’t pay minors for sex. Think we’re ok.

You ain’t built for this, Ginger! 🤭 pic.twitter.com/08v6Fjs6QX

You’re worthy of so much more than this.

Sweetie, cut your losses and run. And make him get an STD test. Get yourself one too! Just get out now! You’ll thank me later.

They’re definitely not coming for me because unlike Matt, I did not commit sex crimes with underaged girls

Naw, they’re coming for Matt. You’ll need to check if you can get your deposit back on the wedding. pic.twitter.com/GyXR8jvD6g

They’re coming for him. That’s why he hired some expensive DEFENSE lawyers.