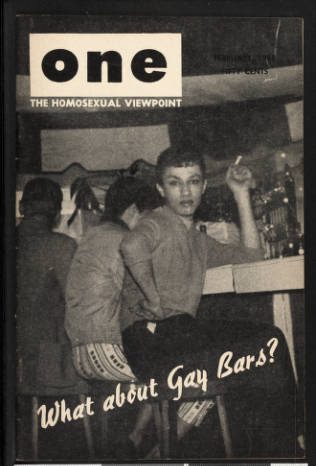 This is the fifth in our series of ONE magazine cover stories.

While ONE addressed hefty issues like obscenity law and psychoanalysis, it just as often provided everyday social commentary on the realities of gay life in the 1950s. In this issue, Robert Gregory ponders the function of the “Gay Bar” in capital letters. Hard to tell how many Gay Bars existed in 1958, but Gregory paints a picture not unfamiliar to many of us:

The Gay Bar, while it by no means offers a total cross-section of the homosexual population of a city or country, nevertheless goes farther, at present, than any other single social institution at collecting together a wide variety of types and temperaments. Anyone who has “made the rounds,” as they say, is readily acquainted with the milieu—the hustlers, the screaming faggots, the queens, the nice ivy-leaguers—sometimes all in easy exchange with one another…

At a time when most major cities have an entire site dedicated exclusively to gay social institutions, it’s hard to imagine the role the gay bar played in the late ’50s. You could hook up there, sure, but the allure was more fundamental than that:

Among homosexuals the feeling of isolation is exceptionally prevalent and often cruel. Empathy, the feeling of spontaneous rapport and understanding with other fellow human beings, is often smothered under personal doubts and misgivings, under mistrust of others, and under insecurity in most personal relations. “What would they think if they knew?” Thus the Gay Bar is exceptionally important to many homosexuals, as the one institution where they can be sure of finding some measure of kinship with others.

Of course, at the same time, there was danger. Gay bars were a target since sex between men was still illegal in every state. Eleven years later the gay liberation movement would be born at a gay bar in New York City.

One is not surprised or dismayed when police swagger in, usually in pairs, glower menacingly at everybody, hurry back to the men’s room to see if anything is going on, glower once more at everybody on their return trip, and swagger out again.

If a cop swaggers into a gay bar now, chances are he’s there to drink, dance and, with any luck, hookup.

How nice finally to be able to enjoy our men in uniform.