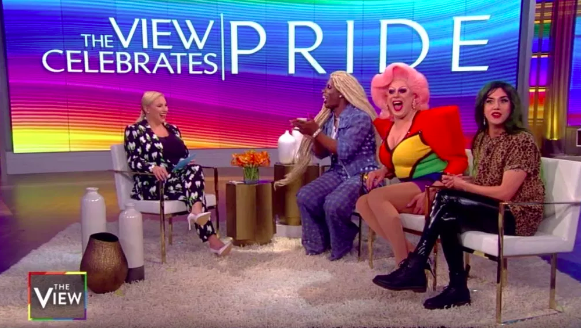 Meghan McCain sat down with RuPaul’s Drag Race stars Monét X Change, Nina West, and Adore Delano for an hour-long interview on The View and it had people feeling all kinds of ways.

First, we should say, we love Monét X Change, Nina West, and Adore Delano. They can do no wrong in our books. And they were great on The View!

Meghan McCain, on the other hand, is another story.

McCain’s husband, Ben Domenech, is the co-founder and publisher of the extreme right-wing blog The Federalist, which regularly posts anti-LGBTQ op-eds and transphobic hit pieces by America’s rising class of bigots.

Domenech, who was fired from The Washington Post after just three days after it was discovered he plagiarized several articles, also has a history of making antigay remarks, including saying Seth Meyers “gargled” Lorne Michaels’ balls for a job and repeatedly calling Supreme Court Justice Elena Kagan a lesbian.

Of course, Meghan is her own person and is certainly not defined by or responsible for her husband’s actions.

But she does profit from the money he makes from peddling anti-LGBTQ propaganda on The Federalist, and she’s never really acknowledged his long history of antigay remarks. In fact, she’s often gone out of her way to avoid discussing it, while continuing to support him and his work publicly.

Oh, and let’s not forget she proudly aligns herself with a political party that, just three years ago, adopted an official party platform that formally opposed same-sex marriage, endorsed anti-sodomy laws, declared transgender people shouldn’t have access to public restrooms, and called pornography a danger to society.

So the fact that she was chosen to interview three drag queens in celebration of Pride month on yesterday’s episode of The View was, well, kinda awkward. Even if she does claim to be an “ally” (which, for the record, she’s not) and loves using the phrase “Yaaas, qween!” whenever possible.

Adding to the awkwardness of it all, the episode aired the same day The Federalist ran a story titled “Mixing Kids With Drag Queens Sets Gay Rights Back Decades,” an op-ed by senior contributor Chad Felix Greene that falsely equates identifying as transgender with being a drag queen and warns about the dangers of Drag Queen story hours at public libraries.

Ummmm what did you husband just publish ? yeah don’t think your fictional kids would have any drag queens reading to them ?

Also today: McCain’s husband publishes a bunch of hit pieces about the LGBT community and drag queens on his website the Federalist. SMDH

Girl… you can’t befriend drag queens and your gay hairdresser and 20 minutes later support a political party that would have us back in closets, or worse.

Just say what you really want… not to have a bad hair day.

Just a heads up.

Nina West does Drag Queen Storytime all the time in Columbus.

It is a disgrace that Meghan’s fake LGBT Ally ass is moderating this. Fuck that garbage.https://t.co/NmZS8gqkFS

This is not 1 article. I’m talking HUNDREDS. Likening gay people to being worse than pedophilia. Articles designed to scare their readers about trans people, with using photos of heavily made up drag queens.

She directly profits off of our dehumanization. That’s not an ally

@meghanmccain Thank you for the advocacy and spotlight you put on the LGBT community today with your interview with the stars of Drag Race. Honest question, no shade, how do you reconcile supporting the GOP while they work against the LGBT community? Do you struggle?

The queens spoke with McCain about a wide range of topics, including the difference between drag queens and transgender people, Drag Queen story hour, and being on the cover of New York magazine. And while things remained civil, and there were even a few genuine laughs, the whole thing ultimately rang hollow.

Watch the full episode below.