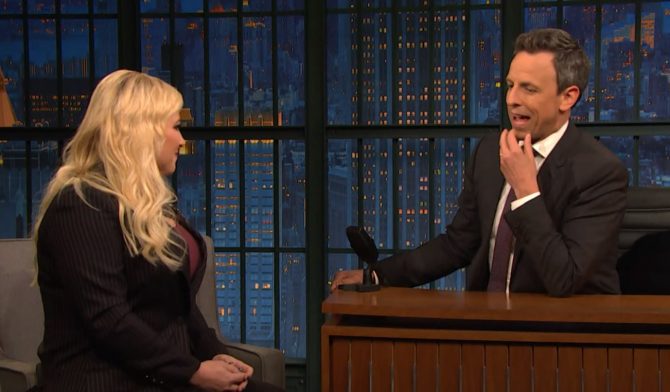 Ben Domenech, husband of The View host Megan McCain and son-in-law of the late Sen. John McCain, has come under fire for a Twitter rant against Late Night host Seth Meyers.

Related: Meghan McCain Ultimatum for the GOPs: Get a Conscience or Die

Meyers interviewed Megan McCain May 7, and the two sparred a bit over her conservative political beliefs, in particular, statements she made accusing Rep. Ilhan Omar of antisemitism. McCain cried foul, accusing Meyers of treating her unfairly. Domenech then chimed in on the exchange via social media, attacking Meyers and his talent, and using gay sex as an insult along the way.

“I see that @sethmeyers, the untalented piece of sh*t who only has his job because he regularly gargled [SNL producer] Lorne Michaels’ balls, went after my wife tonight with his idiotic anti-Semitic bullshit,” he tweeted. “Seth is an awful person and it is known within the industry for how terrible he is. He is a monumental assh*le who is utterly unfunny. He deserves all the mockery he receives from all the people who laugh at him.”

But Domenech didn’t stop there. “Here is proof that white men get ahead despite their obvious lack of talent,” he continued. “It’s @sethmeyers who would beg for a third of the viewers at @TheView. He’s awful, untalented, and a perfect definition of cuck. But the best thing is how all the people around @sethmeyers talk about what a sh*tty person he is. Because oh, it is sad. So terrible. But he deserves all of it.” 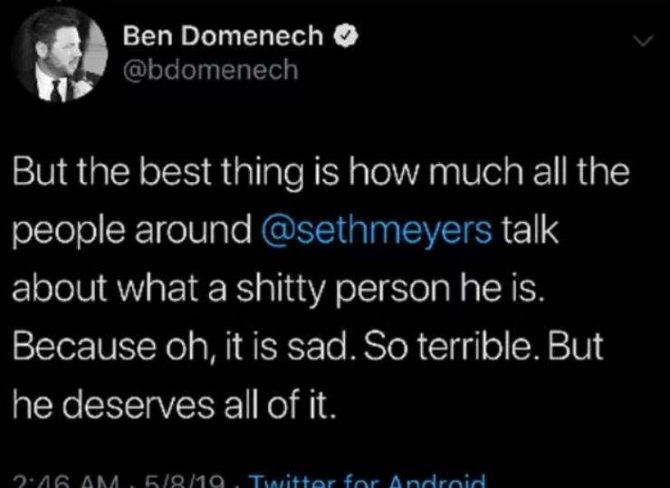 Domenech later deleted and apologized for his tweets, justifying his behavior saying “I love my wife.” He did not relent on Meyers, however, who he accused of being a hack.

I love my wife. I apologize for rage tweeting about how Seth Meyers treated her. I don't like him, I think he's a hack, but I shouldn't have done that. I'm sorry to anyone I offended.

This isn’t the first time Domenech has encountered controversy. A longtime political writer, he lost a job with The Washington Post after only three days over evidence that he had plagiarized a number of articles throughout his career. He also repeatedly insisted that Supreme Court Justice Elena Kagan was a lesbian, even doubling down on her being “closeted” after she and her representatives denied the allegations. In the past, Domenech has also been caught taking bribes from political lobbyists and purposely spreading false information about the Special Counsel investigation into Russian interference in the 2016 Presidential election. Perhaps it also comes as no surprise, but Domenech’s father Douglas Domenech is a Trump appointee to the Department of the Interior, and is currently under investigation for ethics violations.