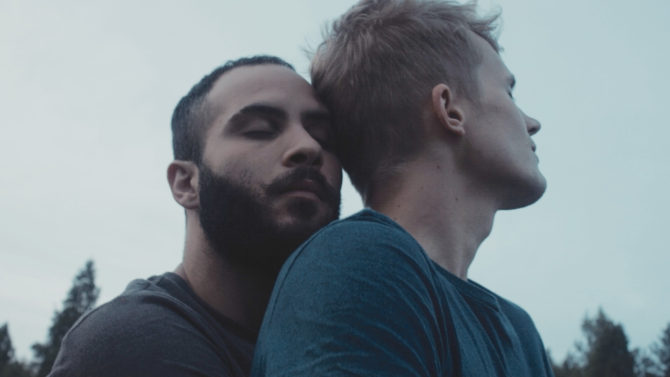 We tracked down Finnish director Mikko Makela via phone to chat about his new film, A Moment in the Reeds.

And with good reason. Sensual, radical and provocative, A Moment in the Reeds, like Brokeback Mountain, offers a potent mix of homo romance and societal indictment rarely seen in queer film.

Reeds takes place over a long weekend, during which Finnish poetry student Leevi (Janne Puustinen) returns to his family cabin for some quiet time and not so quiet renovations. There he strikes up an unlikely bond with Tareq (Boodi Kabbani), a Syrian architect and political refugee who can only make a living as a day laborer in his adopted land.

This is your first film as writer/director. So congratulations–

Thank you so much.

Where did this story come from?

Well, I’d always been disappointed with—or wonder why there wasn’t—a Finnish queer cinema in existence. Finland is generally thought of by the outside world as a fairly progressive society.

And most of the other Nordic countries have produced some queer films, but we were still lacking. So really when I set out to make the film it was to provide some kind of representation for the community in Finland. I wanted to take a wider approach as well. When I left Finland behind myself, eleven years ago now, it had very much to do with the feeling that Finnish society is generally quite closed-minded, conservative and averse to diversity of any kind. So I thought that, really, connected to this also, would be the experience of an ethnic minority in Finland, and take a wider view of what it means to be marginalized in Finnish society.

That sounds quite familiar.

So I set out to make the film just at the beginning of the migrant crisis. Finland was one of the European countries with some of the highest numbers of arrivals per capita. While there were a lot of good responses and empathetic responses in society, there was also huge xenophobic, right-wing, backlash against it. We really felt like we were battling for the soul of the country, and what kind of country it would be: would it be a racist, intolerant country or an empathetic, welcoming society. So it felt very important to portray a character that was someone we might only have read about in the news, in stories written about the masses arriving in the country. I wanted to provide a humanizing, multidimensional portrait of an individual.

That also sounds familiar. You mentioned that you emigrated. Why did you leave?

Very much the same reasons as Leevi’s character in the film. I left in 2007. I grew up in a quite a small town in southeastern Finland, on the Russian border. It was really not a place where I felt there were very many opportunities to become a filmmaker.

Nothing culturally significant that I would like to do. Finland just didn’t feel like home to me at that time, certainly. It was still very homophobic even though we had civil unions—they’d been legalized at that point. But attitudes lagged behind, very much. So it didn’t feel like a place where I would feel comfortable being openly gay. The UK was where I ended up.

Watching the film I kept thinking about how well it would translate to the United States in that many gay men and women have to leave small towns to find their place in society, and that we also have a migration crisis in the US right now. As you say, it’s a battle for the soul of the country.

To their credit, in the 10 years or so I have lived abroad, attitudes toward LGTBQ people have finally evolved a great deal. So yes, it has changed very much since I left. I thought it was beautiful that this year, Helsinki Pride—which hasn’t exactly been a big event for most of its history–attendance grew from 30,000 to 100,000 this year.

It was a remarkable shift. Certainly even during the filming of this film, two years ago when we filmed it, we were due to film inside a shop. And it was all set. Then the day before, we got a notice that the owners had heard about the subject matter of the film and said we couldn’t come and film there. They wouldn’t approve it. So there’s certainly homophobia that exists. I think it’s a generational divide and a city-rural divide.

When it comes to the refugee crisis, certainly in this film, Tareq’s character is educated, an architect. But he works as an itinerant worker. Would you say that’s typical for refugees in Finland?

Yeah. That’s sort of what I’m more worried about in Finland at the moment—the attitude toward refugees, toward ethnic minorities. Unfortunately, as in so many other Western societies as well, there’s been this swell of right-wing political movements. The political discourse has suddenly become openly xenophobic. So I think it’s particularly difficult I think in Finland for refugees arriving because it’s a country where it’s quite difficult to find work if you don’t speak Finnish. You’d have to work in the service industry or manual labor. So that would certainly prevent people with good qualifications from finding work that they could be doing. Generally, because it has been such an ethnically homogeneous country for all of its history, I’ve always felt it’s only slowly coming to grips with embracing diversity. It’s not easy to be non-white in Finland, especially in rural areas. 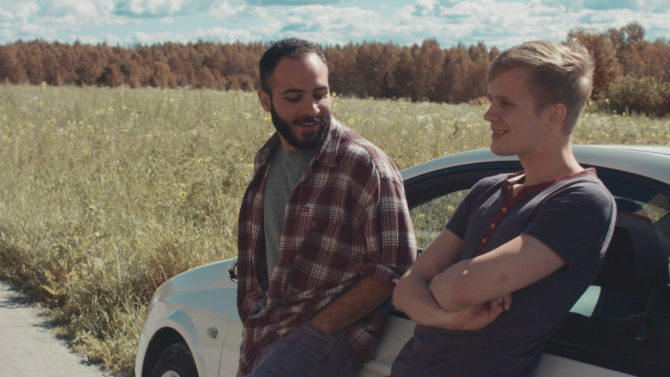 The film features some very frank sex scenes between Leevi and Tareq. For you as director, how did you make your actors prepare? How do you keep the set comfortable?

I mean, I wanted always to film on a small scale because I wanted to tell an intimate story. I never wanted to have too many people on set. I always wanted to keep the crew very small in order to sort of give us the space to feel comfortable, generally, in every scene, to have the freedom to explore the characters. We shot quite chronologically, so the first sex scene was about halfway through the shoot. Also, by that time, we had all gotten to know each other quite well and developed trust between the crew and the cast. I think everyone felt a bit trepidatious about it. Most of the people on the shoot, I think it was the first sex scene they had ever filmed. But it was also very important for the actors, and as well, for me, because it was going to be the first queer film in Finland, it was so important to make scenes that felt authentic. So we felt the responsibility ourselves for representation. The fact that we cared so much about that gave us more courage to film the scenes.

How do you get your actors to the point where they’re so natural?

You know, because we used a lot of improvisation in the wording. I always encouraged the actors to use their own wording in the scene. So I was trying to take off all the pressure. We might have some really long takes, but it was really about trying to capture authentic moments. I was trying to set up real-life situations in a sense, and then capture them. That was sort of the philosophy of doing it. Also, I told the actors that they didn’t at all need to worry about messing up their lines. I was also really interested in capturing the layers and texture of communication in another language, that wasn’t their mother tongue. So that was always part of the style I was exploring. It gave license to the actors to be rather than to act, and then reassuring them that I could shape it in the edit.

How has the film been received in Finland?

Well, at the same time we filmed this, Tom of Finland was filmed. So that beat us in the end to the first gay film. But this provides a nice, interesting counterpoint to that. [Tom of Finland] is a high-budget historical drama. [A Moment in the Reeds] aims to present two people today who are very realistic characters in a very unassuming way. It was received very well, actually. A lot of people felt it was something that hadn’t really been seen in Finnish cinema, especially the honesty in its depiction of love and sex. The most rewarding, of course, was when we got feedback from queer audiences that said it was so great to finally see a Finnish film they could relate to.

Right now I’m developing an episodic [project], which will probably be a TV or streaming series with my producing and writing partner about a 20-something, long-term gay couple navigating early adulthood and the London gay scene. We’re looking at long-term relationships in the context of the gay scene.

A Moment in the Reeds streams on Amazon, iTunes, and YouTube December 4.

Check out Queerty’s exclusive clip and the film’s trailer.