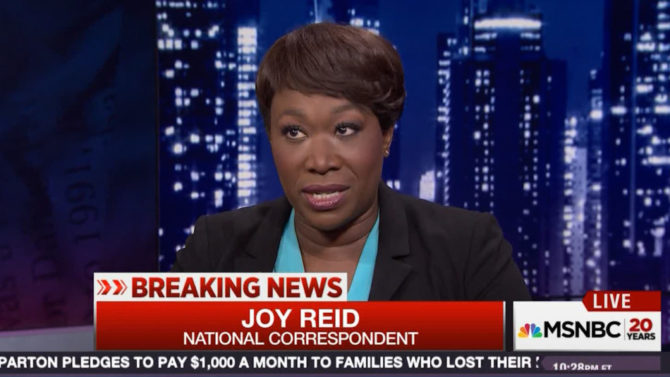 MSNBC correspondent Joy Reid has claimed that recently-circulated homophobic blog posts appearing to be pulled from her own site are fake news.

More specifically, she says she’s been hacked. In a statement to Mediaite, she claims an “external party accessed and manipulated material from [her] now-defunct blog to include offensive and hateful references.”

But while it’s theoretically possible that she was in fact hacked, and that the hacker fabricated old blog posts discussing, among other pseudo-offensive things, being grossed out by gay sex, the story isn’t sitting well with many observers.

Writing for The Intercept, famed journalist and author Glenn Greenwald breaks down the issues involved in what is either a story about a sophisticated, highly specific cyber attack on a public figure, or a story about covering up one’s past to avoid embarrassment.

Since Reid’s blog has long been removed from the web, the old stories were either discovered or planted using the WayBack Machine, a tool that archives the internet.

If true, it would be the first known hacking of the WayBack Machine, and no small feat at that. Again — it’s possible (anything is possible online), but is it likely?

Regarding the Wayback Machine, I don’t know. I’ve never heard of that happening but it doesn’t mean that it couldn’t happen, I guess. Was it the very last post that she published? Because if it wasn’t (and depending upon how her blog was set up), then there may have been more than one copy that would need to be hacked. My old Blogspot blog is like that. … That’s an awful lot of work for a hacker to do, and for what end? To make a homophobic person appear MORE homophobic?

And that leads into another confusing piece of the puzzle: In December of last year, Reid issued a public apology for — wait for it — some old blog posts she’d written that appeared homophobic, including mocking then-Florida Gov. Charlie Crist as “Miss Charlie” and saying he’d spend his honeymoon “ogling male waiters.”

It’s not exactly Jerry Falwell-level homophobia, but by today’s standards, the comments don’t read too well.

Reid called these and other statements she made on her blog “insensitive, tone deaf and dumb,” and for the most part, that was that; people evolve.

So to Carr’s point, why would a hacker expend considerable effort to show that someone who has publicly acknowledged evolving on LGBTQ issues wrote some less-than-PC things a decade ago?

Joy Reid uses the old, "I was hacked!" defense after newly discovered homophobic posts from her blog were revealedhttps://t.co/pOxDi9AcUm

To add to the intrigue, a staffer for the Internet Archive: WayBack Machine addressed the issue in a blog post of his own, sharing this behind-the-scenes timeline:

This past December, Reid’s lawyers contacted us, asking to have archives of the blog (blog.reidreport.com) taken down, stating that “fraudulent” posts were “inserted into legitimate content” in our archives of the blog. Her attorneys stated that they didn’t know if the alleged insertion happened on the original site or with our archives (the point at which the manipulation is to have occurred, according to Reid, is still unclear to us).

When we reviewed the archives, we found nothing to indicate tampering or hacking of the Wayback Machine versions. At least some of the examples of allegedly fraudulent posts provided to us had been archived at different dates and by different entities.

We let Reid’s lawyers know that the information provided was not sufficient for us to verify claims of manipulation. Consequently, and due to Reid’s being a journalist (a very high-profile one, at that) and the journalistic nature of the blog archives, we declined to take down the archives. We were clear that we would welcome and consider any further information that they could provide us to support their claims.

If Reid really was hacked in the way she describes, there is a massive story waiting to be uncovered. Who would do this and how could they pull it off?

And if she reached for a convenient lie in the hopes that the whole thing would blow over, well, she just made it a much bigger deal.