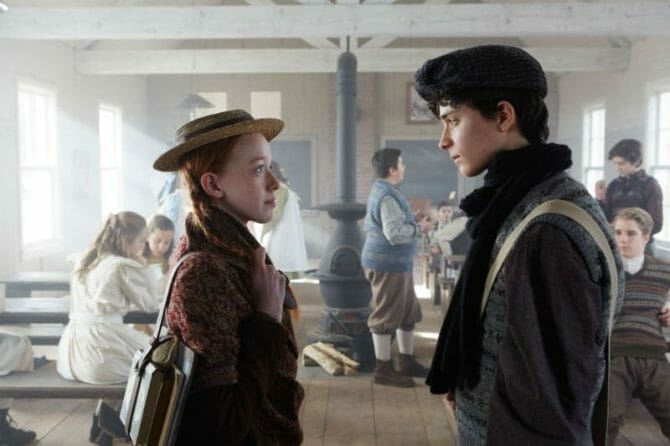 Netflix has developed an impressively deep catalog of original queer content, from Sense8 to Alex Strangelove. Now the streaming giant has gayed up an old classic as well.

Season two of Anne with an E, which is based on Lucy Maude Montgomery’s 1908 novel Anne of Green Gables, cleverly reworks the story to feature five LGBTQ characters.

That includes portraying one of the main roles, Great Aunt Josephine Barry, as a lesbian.

Series creator Moira Walley-Beckett is responsible for the changes and told IndieWire:

“Upon reading [the novel] again as an adult, I was wondering about Aunt Jo. In the book, she’s a spinster and she’s just a bit of a curmudgeon, and that’s kind of it. So, I’m like, ‘Well, she coming to the Barrys for a month and she’s grieving’ – that’s why I decided to justify why she’s there: Who is she grieving?”

“That answer came in Season 1, when the wealthy Aunt Jo revealed that she was mourning the loss of the person whom young Diana Barry (Dalila Bela) thought of as Aunt Gertrude – Josephine’s partner. Although the term didn’t exist at the time, their relationship was a ‘Boston marriage’ – the cohabitation of two women independent of financial support from a man. While the Barrys merely saw this as a friendship, Josephine and Gertrude were in truth a lesbian couple.”

Walley-Beckett jumped at the opportunity to explore the so-called “Boston marriage”:

“It seemed like a perfect opportunity for me to dive into the reality of a Boston marriage that was secret – as it would have been at that time. And so, we touch on that in Season 1, and in Season 2, we get to expand upon it in a way that allows her to provide a forum of acceptance and safe haven for Cole and the other people in her community.”

And as CBN News reports, Aunt Barry is just the first of many queer roles to be written into the series — Anne’s friend Cole, for instance, has been reimagined as gay.

“It would only make sense that there would be somebody in the class who was struggling with identity,” Walley-Beckett said. “It was just unimaginably difficult to do so, especially during that timeframe where it was illegal to be a homosexual, punishable by imprisonment and a death sentence – and punishable in Canada until [1969]. I was very keen to include a storyline like that.”

Anne’s teacher, Mr. Phillips, will also be portrayed as a closeted gay man.

“Also, in my mind, their teacher, Mr. Phillips, has always been an unidentified closeted homosexual. He just has no idea that he was. I thought it would be fascinating to use Cole as a mirror for discovery on his part and see the two different journeys of those characters.”

Season 2 of Anne with an E is available to stream now on Netflix.