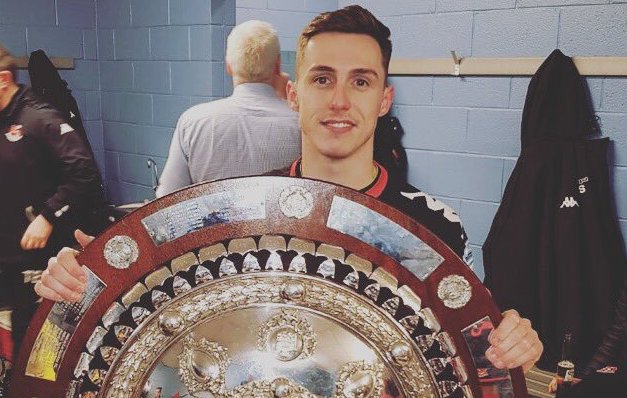 The clip, viewable in its uncensored and highly NSFW glory here, shows Oxford United midfielder Gavin Whyte “walking down the road, playing with their privates and singing,” in the pithy words of The Sun.

Related: Did the soccer players caught having gay sex in the locker room really deserve to be fired?

In a statement posted on Tuesday, January 15, Oxford United said it would meet with Whyte to “warn him as to his future conduct.” Unsurprisingly, the football club chose not to describe the 22-year-old’s antics, merely mentioning “behavior clearly unacceptable from a professional footballer.”

Was happy with that one last night??

“It is totally out of character,” Oxford manager Karl Robinson said in a statement. “Gavin is a quiet, respectful young man who is totally devastated by this: I have rarely heard anyone so remorseful for something that he regrets and knows he shouldn’t have done. Clearly he had drunk too much, and we will deal with that too, but whether you are a footballer or not that sort of behaviour is wrong on every level.”

Robinson continued: “We will sit down with Gavin today and we will remind him in no uncertain terms of his responsibilities. We have psychological and behavioural support here to help him get through this. He is a great kid and I hope the fans can forgive him for one moment of madness.”

The brazen footballer also addressed the incident in the statement, saying, “It was a moment of stupidity from me, one I regret very much and which I have to try and learn from. I can only apologise to anyone I offended and to those I let down by my behaviour. I am embarrassed beyond words but all I can do is try to move on, concentrate on my football, and make sure that nothing like this ever happens again.”

Whyte continued his apology tour on Twitter, describing “a drunk night out” in which he “did something childish and wrong.”