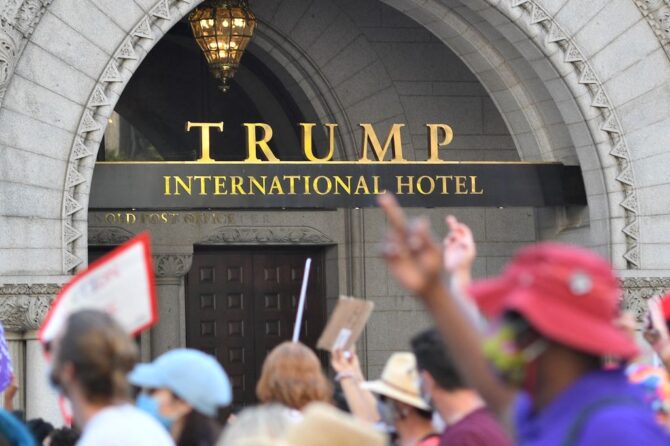 Donald Trump‘s failing D.C. hotel is officially out of business after the ex-president completed the sale of the property to a Miami investor group yesterday, effectively marking the end of his family’s business presence in the nation’s capital.

CGI Merchant Group bought the 263-room property for a reported $375 million. Trump initially wanted $500 million for the place, but after sitting on the market for roughly two years with no interested buyers, he had to drop the price by $100 million… and then another $25 million.

Related: Yet another one of Trump’s properties is in dire financial straits with no hope in sight

After the sale was finalized yesterday, the new owners moved quickly to sage and sanitize the premises. Onlookers reportedly cheered as a cleaning crew came out after dark to start ripping down all the Trump signage, starting with the tacky gold-plated family name plastered above the front doors.

Last year, the House the Committee on Oversight and Reform revealed that, during Trump’s four years in office, the hotel racked up more than $70 million in losses, even though he claimed publicly that it made over $155 million. Not only that, but it received millions from foreign governments in payments and loan deferrals, which he didn’t disclose.

In response to yesterday’s sale, Rep. Carolyn B. Maloney, Chairwoman of the Committee on Oversight and Reform, released the following statement that read:

Today’s sale is the latest in a long line of questionable deals, conflicts of interest, and constitutional violations involving former President Trump and his Washington, D.C. hotel.  The former president will personally receive tens of millions of dollars in profits from selling his lease at a significant premium over market rates, yet the American public still does not know whose money is paying for this deal.  It is unfortunate that the purchaser, CGI Merchant Group, chose to proceed with the purchase before answering the Committee’s questions, but we remain committed to getting answers and lifting the veil of secrecy on this transaction.

The hotel will be rebranded as a Waldorf Astoria and is scheduled to reopen later this year.

interesting that the Trump hotel just blocks down the street from the White House barely made it a year after he left office, since it was never about corruption or anything

Another video of a trump sign coming off a building
pic.twitter.com/UnxruRuGav

There were cheers from onlookers yesterday as construction workers used a cherry picker to remove the "Trump International Hotel" sign in DC – for good.
The ethics watchdog org CREW said: "The Trump Hotel in DC is no more. Good riddance to a sinkhole of corruption."

The “Trump” in “Trump International Hotel” has been covered up. pic.twitter.com/YCAQpK3Bdi

I wonder if the sale price for Trump Hotel DC included the Jumbo Prawns sitting in the restaurant freezer. (He always had to have bigger shrimp in his shrimp cocktail than his guests, true story from annals of the world’s most fragile ego.) @GOP

Signage on the Trump International Hotel in Washington DC being taken down. Investigating report that a commemorative plaque will be installed on the building acknowledging all the crimes that took place inside. pic.twitter.com/HUZzrpbdw4

The new owners tore away the gilded wallpaper in the Trump Hotel and have found out that it's actually just a renovated Days Inn.

The history of Trump International Hotel DC as a going operation has now reportedly come to an end.

Some footage from tonight of work being done on signs at the Trump International Hotel in DC after the Trump Org. closed on selling it to CGI Merchant Group pic.twitter.com/9cGmyKU7PJ