The parent of a woman getting married has turned to the internet for advice after they and their spouse decided not to invite the girl’s gay uncle to the wedding.

Although they have no issue with his sexuality, their daughter’s future husband comes from a family that holds homophobic views. The posted, appropriately enough, posted about their dilemma to Reddit’s ‘AITA’ thread: short for ‘Am I The Asshole?’ 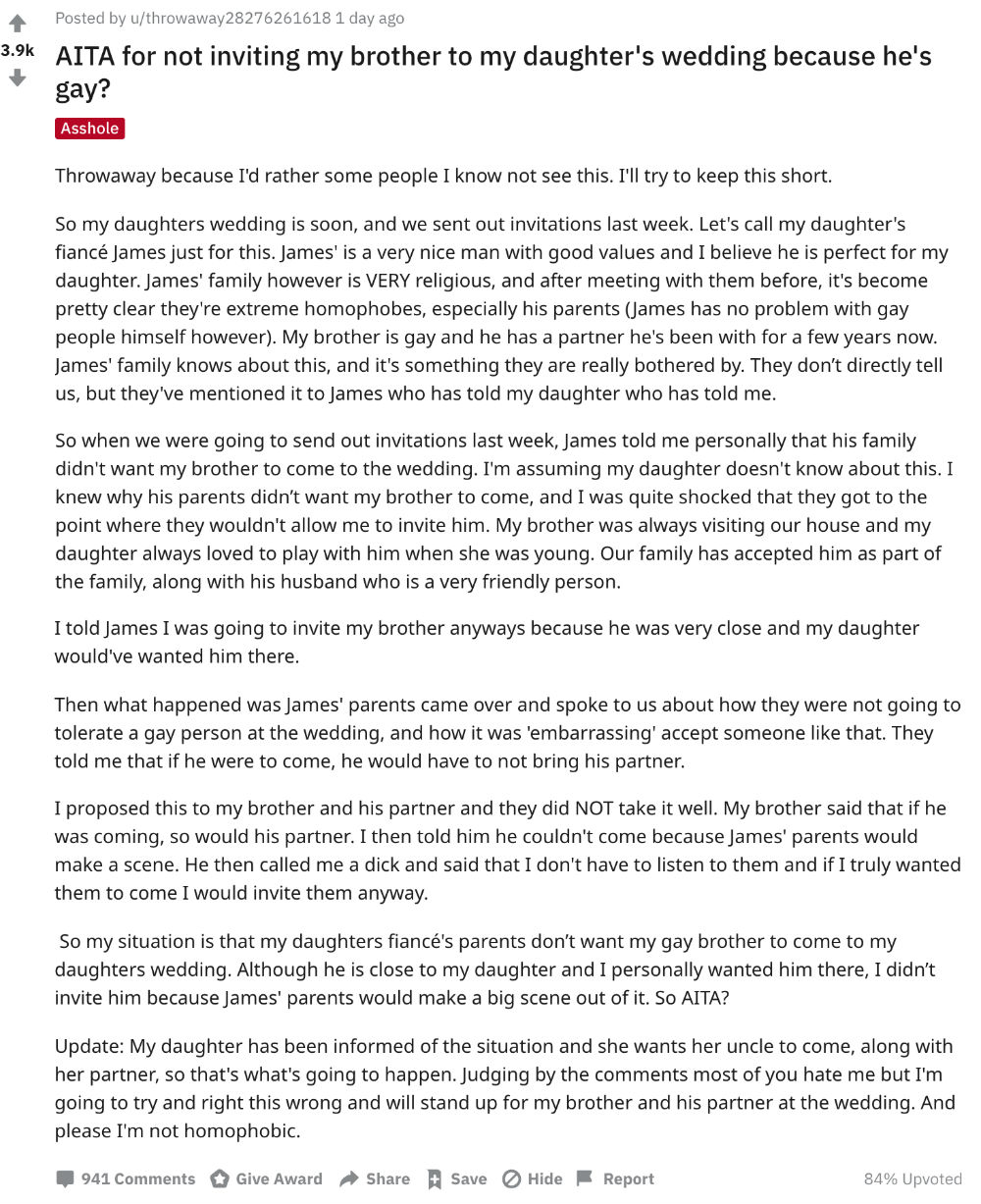 Posting anonymously, “because I’d rather some people I know not see this,” they say:

“So my daughter’s wedding is soon, and we sent out invitations last week. Let’s call my daughter’s fiancé James just for this. James’ is a very nice man with good values and I believe he is perfect for my daughter. James’ family however is VERY religious, and after meeting with them before, it’s become pretty clear they’re extreme homophobes, especially his parents (James has no problem with gay people himself however).

“My brother is gay and he has a partner he’s been with for a few years now. James’ family knows about this, and it’s something they are really bothered by. They don’t directly tell us, but they’ve mentioned it to James who has told my daughter who has told me.”

They say, “My brother was always visiting our house and my daughter always loved to play with him when she was young. Our family has accepted him as part of the family, along with his husband who is a very friendly person.”

To cut a long story short, James asked them not to invite the brother. The parent resisted the demand, saying their daughter would want him there. Then James’ parents told them that if the brother attended, he’d have to attend alone.

“I proposed this to my brother and his partner and they did NOT take it well,” the parent wrote. “My brother said that if he was coming, so would his partner. I then told him he couldn’t come because James’ parents would make a scene.”

Unsurprisingly, the uncle was upset at being asked to attend without his husband and the parents decided it best not to invite him.

“I didn’t invite him because James’ parents would make a big scene out of it. So AITA?”

As you may imagine, hundreds of people commented to say: Yes! You are an asshole!

One commentator said they were an asshole for, “One, for siding with the homophobic over the perfectly nice gay couple. That’s a homophobic choice.

“Two, for making this decision rather than letting it in the hands of the bride-and-groom. Not sure who died and made you the king/queen of this wedding.”

Many other commentators said that the bride should have been involved in the decision-making process.

“If my husband’s family said not to invite my best friend because he’s gay, I’d laugh them out of the church. That decision is to be made by the people getting married,” said another.

“Every time someone says ‘don’t invite X because I’m bigoted towards them’, the correct answer is to not invite the bigot,” suggested another, helpfully.

Others were even blunter.

It seems the hundreds of comments informing this parent that they are, indeed, an asshole, prompted them to think again. They later posted an update to their original posting.

“Update: My daughter has been informed of the situation and she wants her uncle to come, along with her partner, so that’s what’s going to happen. Judging by the comments most of you hate me but I’m going to try and right this wrong and will stand up for my brother and his partner at the wedding. And please I’m not homophobic.”