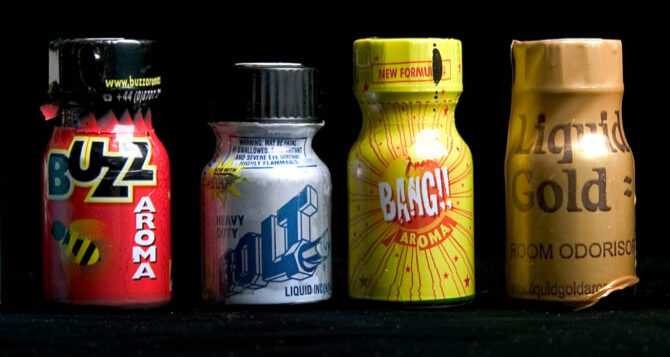 Gay dance floors in NYC might as well be the Wild West as far as party favors are concerned, and poppers are no exception. According to a recent report out of the New York Times, there may just be a new sheriff in town.

We could explain that poppers (aka alkyl nitrites) are an inhalant gay men have hit for a little head rush and a lot of fun for decades, but at this point that would be preaching to the choir. Any sexually active gay man knows that those little bottles at the bodega aren’t cleaning anyone’s video tapes.

Now it seems that the gays have shared this culture with the rest of the queer club triumvirate (the girls, gays, and theys), and ladies are hitting the bottle like never before. Noted party girl Meg Superstar Princess (real name: Meg Yates) was quoted as saying “fashion gays give it to them; that’s how straight girls get poppers.”

There is a knee-jerk reaction of incredulity at girls adopting the world’s premier bottom aid, but it makes a sort of sense that they would pick it up; the rush is ubiquitous, and one can’t help but feel a spirit of “the more, the merrier” when it comes to mind altering substances, especially about five shots in on a Saturday night.

On top of that, the gays haven’t been shy about sharing popper enthusiasm for years. Poppers have come to achieve the same sort of gay novelty status online that enemas have – both as evidenced by queer fans having hyperpop starlet Charli XCX sign them. It’s the same sort of camp factor that had Nina West dressing as a bottle of poppers years ago.

Let us know if you think it’s all good fun or if appropriating poppers culture is simply a bridge too far.