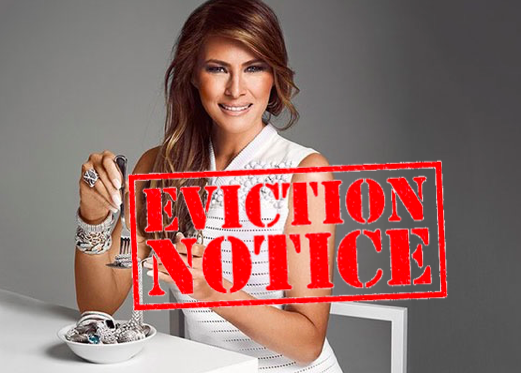 American taxpayers are sick of footing the bill for Melania Trump to live 200 miles away from her husband in a gilded penthouse palace atop Trump Tower, so a change.org petition has been created demanding the first lady either move to Washington, D.C. immediately or start paying for her own security details.

The U.S. taxpayer is paying an exorbitant amount of money to protect the First Lady in Trump Tower, located in New York City. As to help relieve the national debt, this expense yields no positive results for the nation and should be cut from being funded. Make Melania Trump stay in the White House or pay for the expenses herself!

It was started by Doug Caruana and has garnered over 50,000 signatures in just a few days, with nearly 15,000 of them coming over the past 24 hours.

Original reports said security for the first lady and 10-year-old Barron would cost taxpayers as much as $1 million a day; however, the true cost is about $136,000 a day, according to the NYPD. That’s a far cry from $1 million, but it’s still an insane amount of money. Roughly $4 million a month, to be exact. Which is $1 million more than the federal government currently spends on the Meals-on-Wheels program, which Trump says he wants to cut.

Of course, Melania’s $136,000 daily security tab is a drop in the bucket when it comes to the amount of taxpayer money the Trumps are wasting on personal security.

Trump himself cost taxpayers over $13 million last month on his weekend trips to Mar-a-Lago alone. And just last week, the Secret Service requested an additional $60 million to account for “the unusually complicated lifestyle of the Trump family.” To complicate matters even more, the request for additional funding was actually rejected by the White House Office of Management and Budget.

Caruana hopes to collect 75,000 signatures with his change.org petition before delivering it to Sen. Bernie Sanders and Sen. Elizabeth Warren. We don’t think he’ll have any problem doing this.