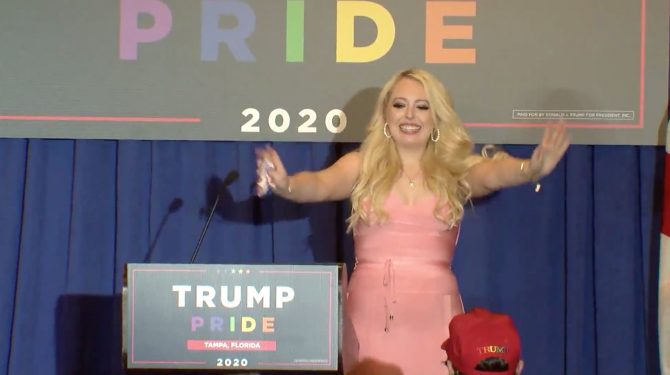 In a desperate attempt to win her father’s love, Tiffany Trump hit the campaign trail on his behalf, headlining a bizarre Pride rally in Tampa over the weekend that led to questions about her sobriety.

“It’s such an honor to be able to be here and speak truthfully, honestly from my heart what I know my father believes in,” Tiffany, who may or may not have been intoxicated, said giddily during in her brief remarks before a sparse room. “Prior to politics, he supported gays, lesbians, LGBQIA+ [sic] community, OK?”

What in gay hell is this bullshit? Also there’s like 12 people in the room. Also I’m no longer convinced Eric Trump is the dumbest of them. It’s a tight race. pic.twitter.com/soqGBBwVNN

In slurred speech, Tiffany went on to say that it deeply “saddens” her that so many people “unfortunately” read “fabricated lies” on social media about her father’s repeated and unending attacks on LGBTQ equality and for some reason believe he’s antigay.

“My father has always supported all of you, OK?” she said.

Related: Tiffany Trump’s former BFF speaks out: “Her dad treated her like sh*t her whole life”

Later in her rambling and barely coherent speech, Tiffany became overly emotional when she introduced her mother, Marla Maples, then shared a story about how her mom’s anonymous gay friend, a Broadway actor Tiffany never met, who died of AIDS. Then she talked about how her dad was going to find a cure for AIDS in the next 10 years.

“There will be [a cure] and god bless!” Tiffany said.

Will someone watch & let us know what Tiffany Trump says at her pride event? pic.twitter.com/5erDJEFoGH

The awkward event was organized by a group called “Trump Pride”, which claims to be “a diverse coalition dedicated to re-electing President Trump, the first President to begin his presidency in support of marriage equality.”

The “diverse coalition” is helmed by a six-person advisory board, all of whom are white men except for one white female.

OMG!!! There is extended footage! There are like 14 people in the entire room for Tiffany Trump’s drunk speech. Holy crap this is pathetic. pic.twitter.com/eDHh0QHCC0

Tiffany Trump is giving me Tara Reid vibes.. girl have another shot! However if trump was my dad I would be drunk too.

You can tell Trump doesn’t care about LGBT people because he has his least favourite child assigned to the job. https://t.co/nOdNOqevOC

They didn’t even send a Trump child Donald likes to that “Pride” event. He barely claims Tiffany. pic.twitter.com/Bc2YhfhWzE

What Tiffany Trump thought hosting that pride event would be pic.twitter.com/eHxgTl8vhX

Tiffany Trump is that drunk annoying straight girl in every gay bar pic.twitter.com/QEk6ay3NLD