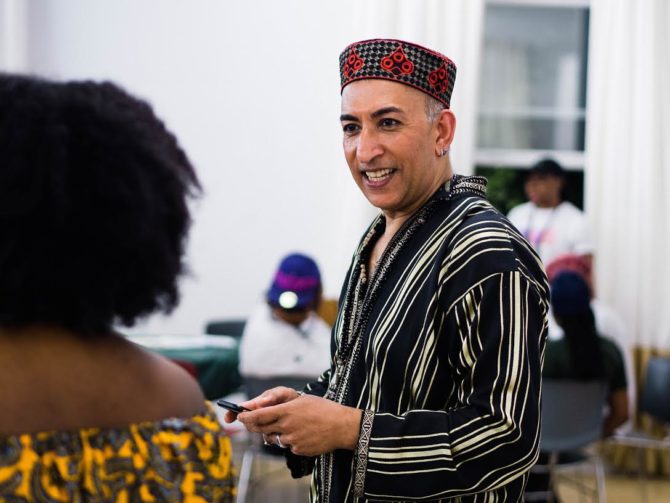 “I am enough. God loves us all,” El-Farouk Khaki answered with a smile. The two of us sat legs crossed at a table in the back of the Glad Day Bookshop in Toronto. Here in the world’s oldest still-in-business LGBTQ bookstore, in the middle of Pride month, during the holy month of Ramadan, sat us two gay Muslims. This was my interview with him to find out what the world should know about LGBTQ Muslims.

As El-Farouk graciously thanked the staff for bringing us a cold bottle of water on this particularly hot day, I could see that he was exhausted. El-Farouk, Imam and co-founder of the Toronto Unity Mosque, had just finished Friday prayer services for his congregation. The Unity Mosque has been my home and its congregation has been my family for nearly two years now. It’s a family which continues to grow in many ways – including the birth of El-Farouk and his husband’s now 1-year old son.

El-Farouk has become a sort of go-to person journalists would approach whenever doing a story on LGBTQ Muslims. Though bleary-eyed and tired, having been through these motions many times before, El-Farouk was still ready to be interviewed. “When we started in 2009,” El-Farouk began, “we [the Unity Mosque] were the only space that claimed to be Muslim and queer or queer affirming that conducted prayers and provided religious services for queer identified Muslims.” Since then, in addition to LGBTQ inclusive mosques independently created by other queer Muslims, El-Farouk himself has helped setup chapters of the Unity Mosque in other cities across Canada and the United States. This growth has turned the Toronto Unity Mosque into something of a flagship in this space. 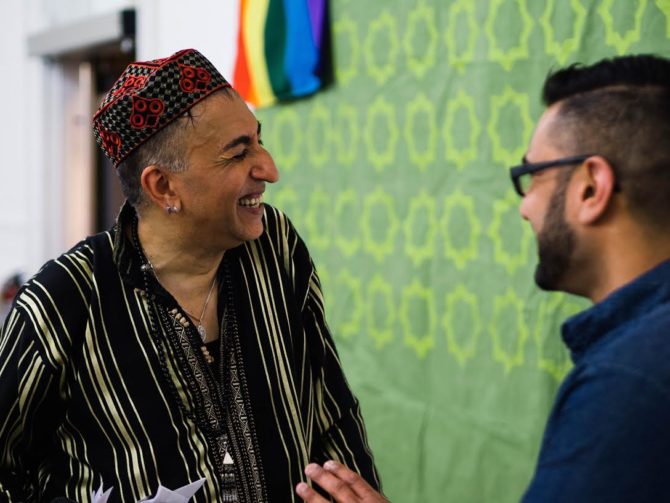 “We’re the only one that has been meeting every Friday for 9 years,” El-Farouk points out. “Our average [attendance] goes from 20-50 people,” he adds. Thanks to my own technical support and volunteering with the Toronto Unity Mosque, those too far away or unable to safely come to the mosque in person are now able to virtually attend services through a private livestream. By my own estimates, this makes the Toronto Unity Mosque the largest LGBTQ mosque in the world. “I guess people can contest whether it’s the biggest or not,” El-Farouk says – his background as a lawyer no doubt giving him pause on embracing the title as Imam of the world’s largest LGBTQ mosque. But, he adds, “that’s a luxurious problem.”

For me, embracing the Toronto Unity Mosque as my home and chosen family has meant further estranging myself with my biological family. My father, who responded to my coming out by offering to arrange a marriage to a woman as a cure, has refused to set foot inside the Unity Mosque. Invitations to my parents to break bread and break fast at the Peace Iftar (an annual Ramadan dinner open to all people regardless of religion or sexual orientation organized by a group of Muslims including El-Farouk Khaki) are soundly rejected. Such spaces to my Bangladeshi Muslim parents, through the filter of their conservative Wahhabist interpretation of Islam, are not seen as legitimately Islamic.

“I have nothing to say to them,” El-Farouk says with a shrug when I asked him what he would say to conservative Muslims like my own family who don’t see the Toronto Unity Mosque as legitimate. I laugh because, on previous occasions, I’ve seen El-Farouk get deeply upset and even pissed when I and others at the Unity Mosque recount the intolerance from our biological families. The most furious I’ve ever seen El-Farouk was when he heard that my father told me that, in the eyes of Allah, gay couples raising children would never been seen as true parents. “Well, I would say,” El-Farouk adds as his eyes flicker – perhaps recalling that moment of fury – “where’s the love in your mosque?” 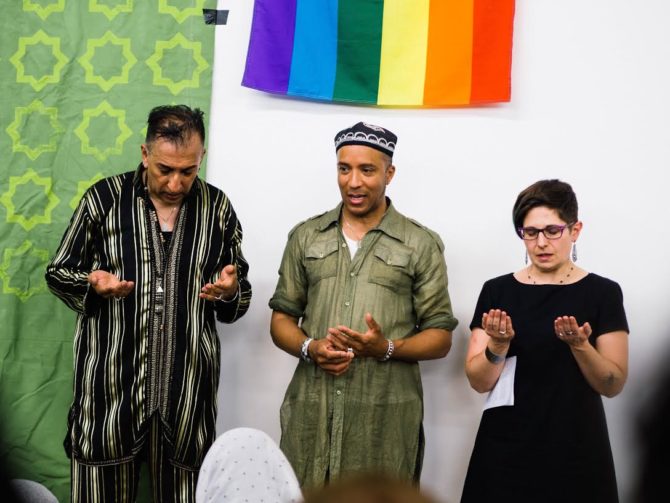 “Every verse in the Qu’ran except one, begins with ‘in the name of God the tenderly compassionate, the infinitely merciful’. Where’s the compassion and mercy in your mosques?” asks El-Farouk before looking at me and asking “You know?”. Though El-Farouk was clearly preaching to the choir with his question, I couldn’t help but be pained by it. With it brought back memories of one of the very last times I set foot in a mosque with my father. “If they knew who you are, they’d look down on you” my father said. Perhaps I was projecting but I could sense a similar pain coming from El-Farouk.

“I was about 12 or 13 when I first realized that I was sexually attracted to other guys,” explains El-Farouk. El-Farouk took pauses every few words as if deliberating over ever sentence. “Coming to accept that,” qualified El-Farouk, was a “many multi-year journey”. As he explained, it was a journey that involved him hoping these feelings would go away, to one where he hoped he was bisexual (and could some day find himself attracted to the opposite sex), to finally accepting his homosexuality. Largely shaping that multi-year journey were his Muslim parents.

“I can’t say that they were thrilled,” El-Farouk says referring to what he calls his “first” coming out to his parents at the age of 16. “They didn’t scream and shout but [what] they actually did was say to me that it was normal for boys to go through these kinds of periods and this kind of questioning but that I would grow out of it and that my faith and prayer would help me in my moments of weakness.” This reaction from his parents sent El-Farouk back into the closet for over a decade. 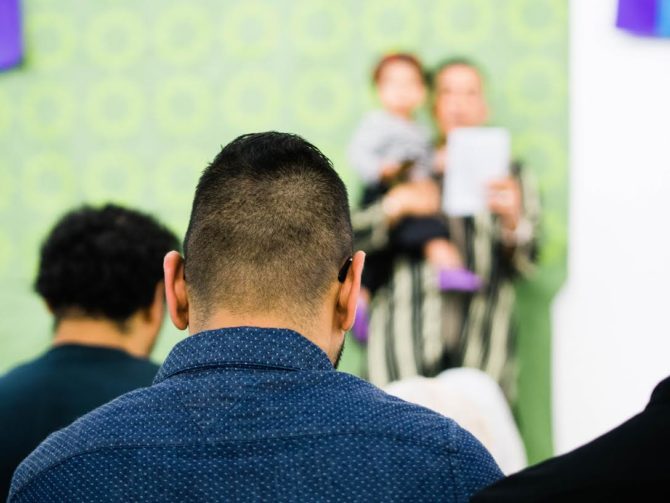 “I came out to them again when I was about 30 years old and by that time there was no ‘pray the gay away’ it was a done deal by that time. It was hard for them.” It was hard for them. As I noticed El-Farouk avoiding discussing his own feelings, he began talking without pause – perhaps subconsciously to prevent me from prying. “I mean, I’m an only child and it was difficult,” El-Farouk said as he breathlessly segued into an academic analysis of typical Muslim family reactions – effectively emotionally detaching himself from the conversation. At the first pause El-Farouk took, I asked: what was the hardest part of coming out for him?

“That’s a multi-faceted question,” El-Farouk said and he paused to think. “I think through all of this was a real fear of disappointing my parents and hurting them,” El-Farouk explained. El-Farouk recounted how his father approached him after coming out a second time. “He came and told me how hurt my mother was and if I could just try… if I could just try,” as El-Farouk recounted his father’s guilt-trip to pray the gay away, it was not anger I heard in his voice – but guilt. “I was also aware of my father’s profile in the larger Muslim community and I was always concerned about the impact that my homosexuality would have on my parents in terms of their community standing,”

The guilt that was compounded by the circumstances surrounding his second coming out. “My first long-term relationship ended with my partners’ death,” explains El-Farouk. “My then partner, Guy, was diagnosed with HIV shortly after I came out to my parents. So they were dealing with a double-whammy kind of situation,” El-Farouk says solemnly. “It sits heavily on me” he says, adding “I put them through a lot.” Guy passed away in 2004. 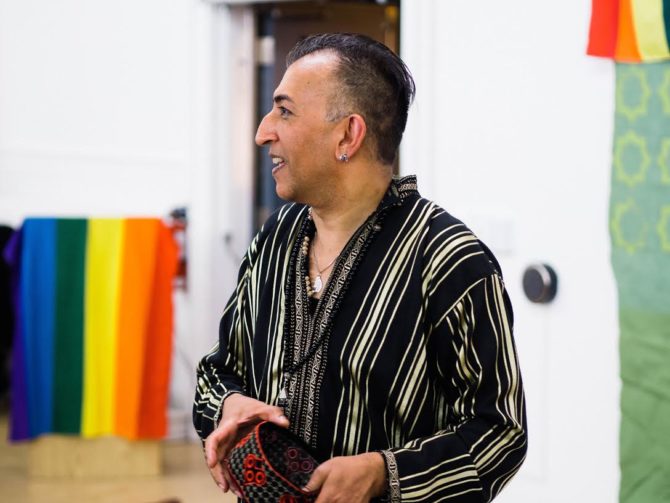 As I checked my phone to ensure the audio of this interview was being properly recorded, I knew this interview would be difficult to write about. So much of El-Farouk’s story is triggering (for lack of a better word). I know what it’s like to feel guilt over parents who feel anguish simply because you don’t want to live in secret. As someone who came out both as gay and suicidal in the aftermath of same-sex abuse, I know what it’s like to burden my parents with a “double whammy”. If I could have prayed the gay away, I would have done so just so I could have spared my parents’ grief. Which is why, much like El-Farouk, I didn’t come out until I was in my 30s.

The difference between myself and El-Farouk, in the decades between our respective stories, is that I wasn’t alone in my struggle. “It was a very different time in the and a very different time even in Canada for queer visibility and queer communities..” explained El-Farouk of his experience being a gay teenager in the 80s. “There were no spaces for 16 year olds. Except if you could get into a bar or a club.” The reason I wasn’t alone in my struggle as a Queer Muslim is because of some of the organizations and spaces that El-Farouk himself had helped to create.

For me, the Toronto Unity Mosque is a place where I can heal from what El-Farouk refers to as “spiritual trauma”. Where Queer Muslims like me can bow our heads in prayer to God without being told we don’t love God – or our faith is not strong enough – simply because we accept our sexual identities. It’s also where we can begin to defuse the feelings of guilt we have over the grief experienced by our queerphobic biological families and where we can worship God away from what El-Farouk refers to as “dominant culture” Islam shaped Saudi Arabia’s well-funded conservative Wahhabist school of thought. 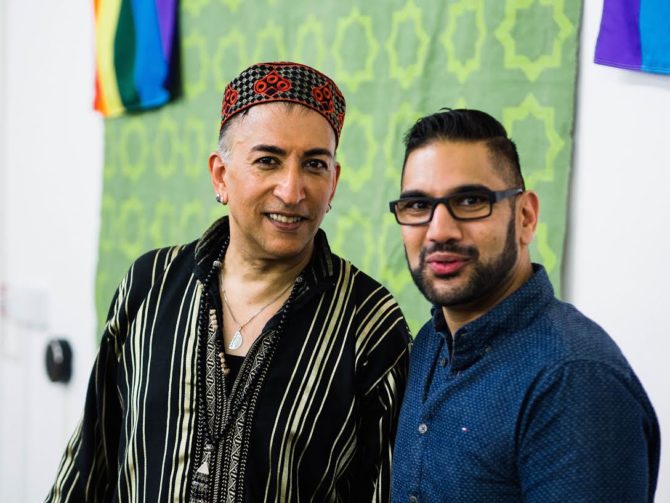 Sadly, in comparison to many others who attend the Toronto Unity Mosque, El-Farouk and I are amongst the more privileged. Yet, it is often people like El-Farouk and myself who are lifted up through the media as representative of Queer Muslims. Which brings us to the reason why El-Farouk Khaki and I were sitting in the world’s oldest still-in-business LGBTQ bookstore talking about what is likely the world’s largest LGBTQ mosque. This interview is the first of a series where members of the Toronto Unity mosque – most far less privileged than either El-Farouk or myself – can share their story and tell the world what they should know about queer Muslims.

I ended my interview with El-Farouk asking this very question: what is the one thing he wants the world to know about queer Muslims? El-Farouk smiled and looked me in the eye. “I am enough,” he says, “God loves us all.”

Shawn Ahmed is a journalist and queer Muslim activist who has been honored by both the World Economic Forum and the Webby Awards. In addition to working with various non-profit organizations in Canada, Shawn currently serves as a member of the Real-Time Academy of Short Form Arts & Sciences and as an associate member of the International Academy of Digital Arts and Sciences.

down and out
18 comments