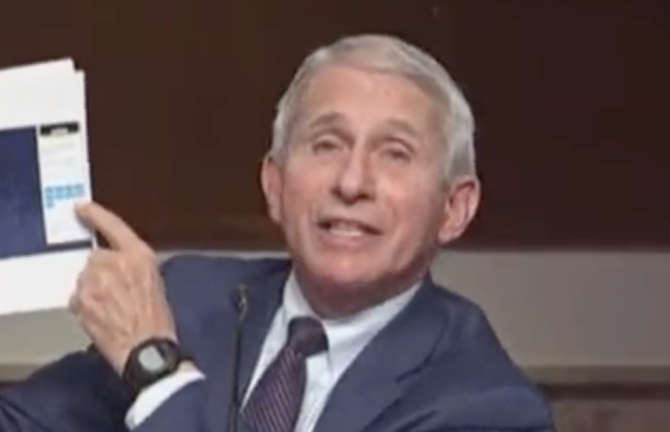 Dr. Anthony Fauci appeared before a Senate hearing Tuesday morning and clashed with Rand Paul, accusing the lawmaker of “distorting everything about me.”

“The last time we had a committee,” Dr. Fauci said, “[Senator Paul] was accusing me of being responsible for the death of four to five million people, which is really irresponsible. And I say, ‘Why is he doing that?’ There are two reasons that’s really bad. The first is it distracts from what we’re all trying to do here today, is get our arms around the epidemic and the pandemic that we’re dealing with, not something imaginary.”

He continued: “Number two — what happens when he gets out and accuses me of things that are completely untrue is that all of a sudden, that kindles the crazies out there and I have…threats upon my life, harassment of my family…with obscene phone calls because people are lying about me. Now I guess you could say, well, that’s the way it goes, I can take the hit. Well, it makes a difference, because as some of you may know, just about three or four weeks ago on December 21st, a person was arrested who was on their way from Sacramento to Washington, D.C., at a speed stop in Iowa…The police asked him where he was going, and he was going to Washington, D.C. to kill Dr. Fauci. And they found in his car an AR-15, and multiple magazines of ammunition, because he thinks that maybe I’m killing people.”

“So I ask myself, ‘Why would Senator [Rand Paul] want to do this?'” Dr. Fauci asked, before holding up a printout of Paul’s website. “So, go to Rand Paul’s website, and you see ‘Fire Dr. Fauci’ with a little box that says, “Contribute here.” You can do $5, $10, $20, $100. So you are making a catastrophic epidemic for your political gain.”

Earlier in the hearing, Dr. Fauci said the nation faces an “urgent need” for a new vaccine that would be more effective at preventing new variants of Covid-19 and other coronaviruses.

“Looking ahead in the context of the inevitable continual emergence of new variants, the importance of developing a pan-coronavirus vaccine, namely one that would be effective against all SARS-COVID-2 variants, and ultimately against all coronaviruses, becomes even more apparent,” he told the committee.

Meanwhile, far-right conspiracy theory group Project Veritas has claimed Dr. Fauci was personally involved in the creation of the virus along with the Wuhan Institute of Virology. The claims are entirely unverifiable.

Rand Paul has repeatedly called for Dr. Fauci to be fired as the director of the National Institute of Allergy and Infectious Diseases.

how many disaster movies start with some asshole politician like Rand Paul telling an expert like Dr. Fauci to shut up

Dr. Fauci is owning the fuck out of Rand Paul today and I’m loving it.

Dr. Fauci dragging Rand Paul, again, is what I live for.

Dr. Fauci holds 38 honorary doctoral degrees, advisor to 7 Presidents, from 1983 to 2002 was one of the world's most frequently-cited scientists across all scientific journals, and a Presidential Medal of Freedom recipient.

Rand Paul is an eye doctor.

Rand Paul gets his panties in a wad over Dr Fauci. Then Dr Fauci exposes how Paul uses those attacks to fundraise. Busted.

I'm not sure why Rand Paul is allowed to do this to Anthony Fauci but I'm glad that Fauci is sticking up for himself.

Paul should be censured.