A restaurant in New Zealand can’t turn over tables fast enough after the owner of a neighboring business told a woman not to eat there because it was run by a same-sex couple.

Ken Miller and Jason Brumbaugh are the proud owners of Saluté, a Mediterranean tapas restaurant located in Greytown, Wairarapa on New Zealand’s North Island. The restaurant first opened in 2001.

When Alexia Black asked a neighboring shopkeeper for a restaurant recommendation, she says the woman encouraged her to go anywhere but Saluté.

“We were told that it was owned by two gay men from America and that ‘locals don’t eat there,'” Black wrote in an online review that has since gone viral.

“When we asked what was wrong with the food we were told they couldn’t comment as they hadn’t eaten there in over a year, but that we should drive to the next town, Carteton, for lunch.”

According to Black, who identifies as queer, the woman said it was a “real shame” about the restaurant, then added she “hoped something nice could be done with the place in future.”

“So of course these queers walked straight into Saluté,” Black wrote. 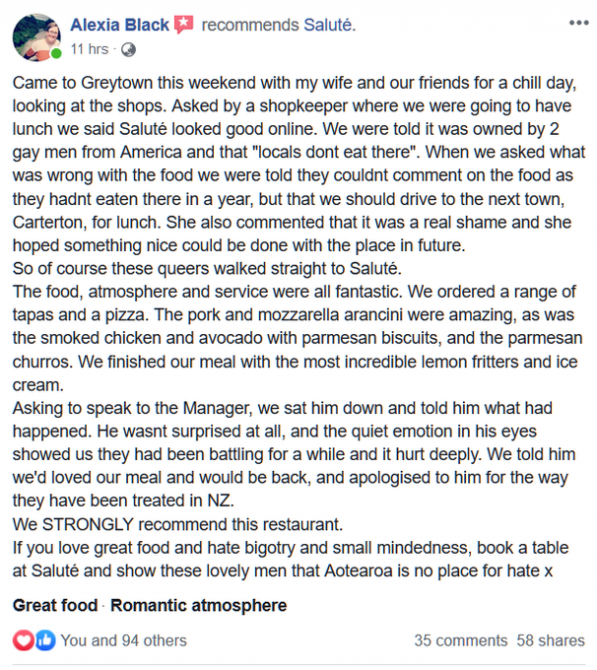 After the meal, Black asked to speak to the manager and explained to him what the woman had told her.

“He wasn’t surprised at all,” wrote Black, “and the quiet emotion in his eyes showed us they had been battling for a while and it hurt deeply. … We told him we’d loved our meal and would be back, and apologized to him for the way they have been treated in NZ.”

“If you love great food and hate bigotry and small mindedness, book a table at Saluté,” she concluded, “and show these lovely men that Aotearoa is no place for hate.”

Since Black posted her review, business at Saluté has been booming. Not only has the restaurant had a major uptick in reservations, but it’s had to extend its hours and was recently named “Best Restaurant” on Restaurant Guru.

Well, this is nice. 🙂 Many thanks to our loyal and dedicated guests for making Saluté a "Best Restaurant" on Restaurant Guru. It is your love and support that inspires us each day to deliver our very best, and for that, we thank you. Cheers! #gratitude https://restaurantguru.com/Salute-Greytown

“It’s been extraordinary to see the response of people,” Miller tells the New Zealand Herald, adding that he and his husband have been completely overwhelmed by the response.

“We’ve had such an outpouring of support, with people telling us that this is not New Zealand,” he adds. “We agree with it. When we left the US, we chose New Zealand because we love it so much. This is the NZ we fell in love with. It’s overwhelming in a beautiful way.”