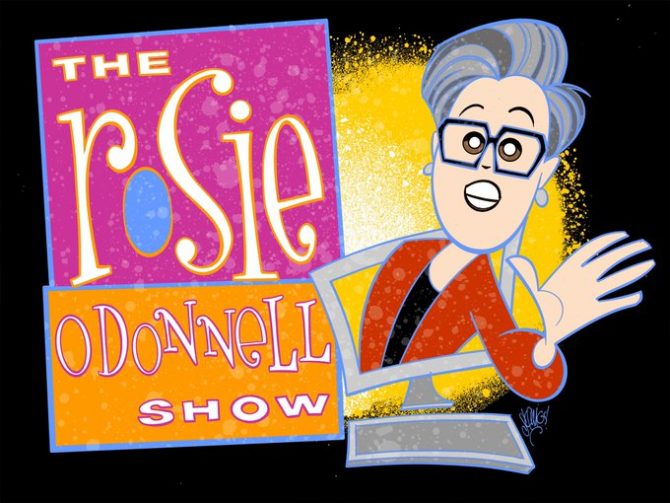 Get ready for some serious ’90s nostalgia because The Rosie O’Donnell Show is coming back and, honestly, we couldn’t be more excited.

The beloved daytime talk show just announced she’ll be hosting a one-night-only special of her iconic show this Sunday as part of a fundraiser for The Actors Fund to help raise money for the theater community during the coronavirus pandemic.

“Everybody who knows me knows that Broadway has been one of the brightest lights in my life since the time I was a little girl,” O’Donnell said in a statement. “It has also been the lifeblood of New York City for generation after generation.”

“After all Broadway has given to the world, now—in this time of tremendous need—it’s our turn to give something back. There is no better way to support this community than via The Actors Fund. And, with a line-up like this, I dare you not to tune in.”

People on Twitter are already freaking out over this.

My all time favorite show, you made me laugh and feel like the world was ok, I used to videotape the shows and watch when I got home from work…..EVERYDAY! This sounds amazing!!! #thankyou

The Rosie O’Donnell Show was my first talk show I ever loved as a kid! This makes me so very excited for one more episode, especially because of what the world is facing right now! Thank you, Rosie, for always making me smile ❤️❤️ Can’t wait to watch this!!

The Rosie O’Donnell Show originally aired from 1996 to 2002 and was a huge hit, nabbing five Daytime Emmy Awards for Outstanding Talk Show over the course of its six seasons. Topics often covered included Broadway shows, celebrities, kids, families, charities, and organizations that were doing good in the world.

The special evening will feature a slew of incredible talent, including Gloria Estefan, Billy Porter, Randy Rainbow, Idina Menzel, Neil Patrick Harris, Judith Light, Barry Manilow, and Darren Criss, just to name a few. Producers ensure that all will be performing “from the comfort of their own homes.”

John McDaniel, the original music director/composer/producer of The Rosie O’Donnell Show, is also set to return.

Kristin Chenoweth, also slotted to appear, has already been practicing hitting the high notes at home.

Last week, the Broadway star posted a video to Instagram of herself singing and cleaning, along with the cpation: “Got a @tiktok… looks a little like this… High notes & clorox wipes!”

Got a @tiktok… looks a little like this… High notes & clorox wipes! ?? Join me on #TikTok: link in bio & story!

The special, presented in partnership with Revelations Entertainment and Broadway.com, will air live this Sunday, March 22 at 7 p.m. EST on Broadway.com and its YouTube channel. Tax-deductible donations can be made here.

We’re sure it’s going to be an amazing show. Let’s just hope Rosie doesn’t forget to bring the koosh balls!

Related: Rosie O’Donnell Reveals How Cosmo Editor Kept Her From Coming Out In 1992