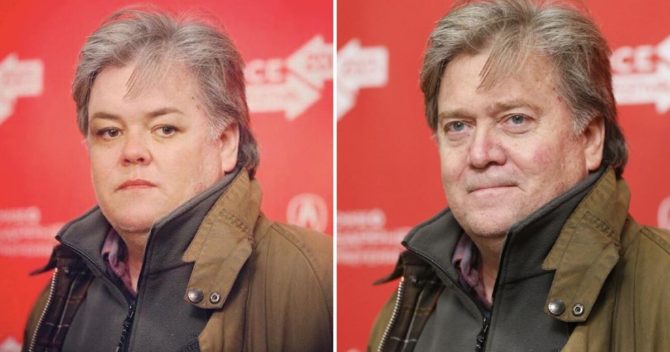 When asked by a fan on Twitter earlier this week if she would ever consider playing Steven Bannon on SNL, Rosie O’Donnell replied:

This got the rumor mill going. Then yesterday, Rosie changed her official Twitter picture to a photoshopped image of her face on Steve Bannon’s head, and her followers quickly took notice:

Oh, my, GOSH! @Rosie would OWN a Steve Bannon skit! SNL needs to make this happen and soon! ?? https://t.co/LevMAEInXn

A thing happened in court but also, this is @Rosie O'Donnell's profile pic currently.

I am on the floor. Come resuscitate me. pic.twitter.com/KWzfcdQPjT

@nbcsnl Rosie O'Donnell as Breitbart guy is a MUST

@Rosie's new avatar is industrial-grade trolling of Trump WH. Retweet if u want Rosie to play Bannon on @nbcsnl. Come on, #SNL. Just do it! pic.twitter.com/nSnF54wmD9