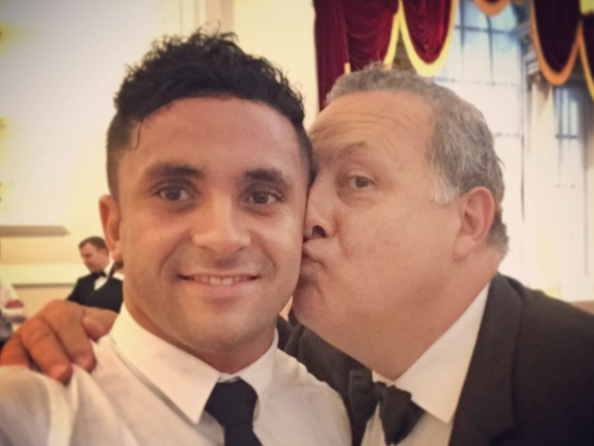 Former English Sevens star Sam Stanley made headlines earlier this year when he announced on Instagram that he had been in a relationship with a man named Laurence Hicks for the past seven years. Not just that, but they recently got engaged. And, oh yeah, Laurence is a few decades older than him:

After being a part of each others lives for almost 7 years, @lorenzo_uk has been my pretend godfather, uncle, cousin and many others in order to make sure no one found out about us and that we were a couple ? funny looking back after having come so far together. The most loving man I know and I'm incredibly happy to say we're now engaged ? ?: @mrjonathanphang

Queerty had a chance to chat with the May/December love birds, who currently run a luxury B&B in Sicily called Casa Piccolo Paradiso, about their relationship, the challenges of being in an intergenerational relationship, people’s response to their surprise engagement announcement, and their future wedding plans.

Check out what they had to say…

QUEERTY: How did you guys meet? And when did you first become a couple?

SAM: We met online on a site called silverdaddies.com. For me, it was love at first sight. I was only 18 at the time and I just fell in love pretty much straight away. I couldn’t tell you what it was but for me something just felt right. We had our troubles and even some breaks in between but we kept on being drawn back to one another. Laurence missed me!

How many years apart are you in age? And how do people typically respond when they learn you are a couple? 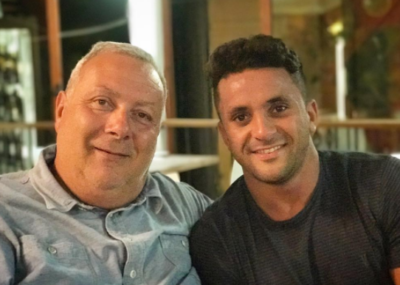 SAM: There is a 34 year gap between us. I think people are obviously shocked at first because it’s different from the norm. However, once they get to know us and see us together their opinion normally changes. You can’t blame people’s reaction because, growing up, you only learn about sex between a man and woman in sex education classes, so not only do we break the stereotype by being gay but also because of our difference in one of us liking older chubby men and the other younger fitter boys.

LAURENCE: There is a huge difference in reaction by different people. Some are probably afraid to say what they really think to our faces, but we don’t really worry about what people think because we are happy together. People who spend time with us as a couple totally get it. They see how we are with each other and how we behave together.

SAM: I think if you’d caught the reaction to our engagement online most of the hate was from other gay people. That surprises me quite a lot with what gay people alone have to go through in terms of being judged. There’s a hell of a lot of judgement just within the gay community.

LAURENCE: Younger gay guys who are obviously not into generational relationships don’t get it at all, particularly the difference in body size. Funnily enough, most of our straight friends are very comfortable with it. We both know the intergenerational thing is not everyone’s cup of tea, but please don’t judge either of us without really knowing us or appreciating the love we have for each other and the joy we bring to each others lives.

Sam, have you always been into older guys and/or bears?

SAM: Yes I have always been attracted to older bigger guys and I really have no idea why. But that’s OK! It just is what it is and for me I’ve accepted that. 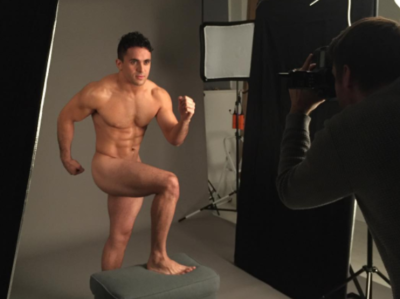 Laurence, Sam has never been shy about taking his clothes off for the camera and sharing risque photos on Instagram. How do you feel about all that? Did it take some getting used to?

LAURENCE: I have to confess the first time Sam did the photoshoot for Gay Times, I was a little upset that he was exposing himself so publicly even though I fully supported the cause that incentivized him to participate, which was to raise awareness about Prostrate Cancer.

To be honest, I wasn’t ready to share so much of the guy I loved with everyone and the thought that a number of people would be drawling over his pictures provided some gut wrenching moments. However, it became clear that Sam was fully comfortable with it all and I realized that it was something I had to accept and over a period of time, I guess I’ve just gotten used to it.

What are some of the greatest challenges about being in an intergenerational relationship?

SAM: I think even after the last few years of coming out and then being so open about our relationship and not having to worry what people think, we’ve now moved to Sicily to a small town where it’s a little like going back in time and Laurence seems a little unsure of telling some people as he’s worried about what they think.

LAURENCE: The age difference can present a number of challenges to the relationship, but the 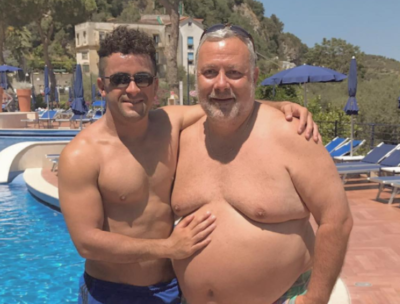 key to success is to try and forget that there is such a difference and maintain a level playing field in as much of our day to day lives as possible. In any relationship, whether intergenerational or otherwise, there will be cultural, academic, etc. differences between partners who come from different backgrounds and environments. Learning about one another is all part of the building of a relationship and dealing with the age difference is just another to add to the list. There is nothing paternal about our relationship, as we see each other for who and what we are and not, as some might think, a father/son scenario..

What do you think is the key to a successful intergenerational relationship?

LAURENCE: Be as equal in your day to day lives as possible and don’t worry about the math. Focus on what attracts you to each other and the experiences and memories and life you build together!

When’s the wedding? Where will it be? How are plans coming along?

SAM: Ha! There have been no wedding plans as yet. The move to Sicily and change of life has been challenging enough and been a lot to deal with. I assume it’ll be back in London but we’ll see what happens. Possibly next year or year after. 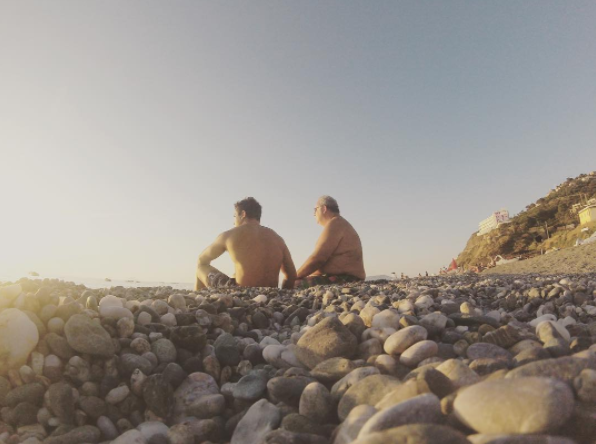