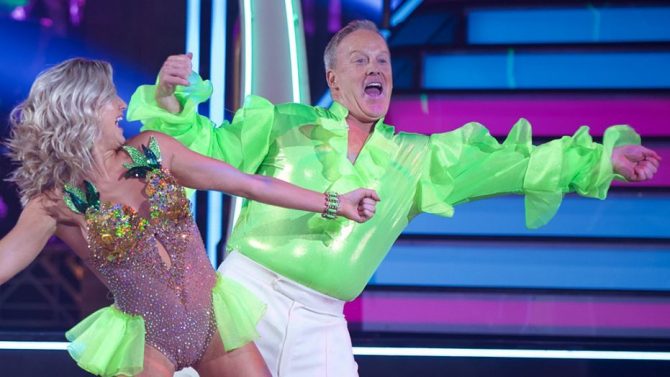 America entered yet another horrifying realm of the Twilight Zone yesterday evening when Donald Trump‘s former mouthpiece Sean Spicer made his debut on Dancing With The Stars.

In his video introduction, Spicer, who now works for a pro-Trump super-PAC, said, “There’s no question my time in the White House was very tumultuous. I think it gave people a very one-dimensional look at who I am as a person.”

He then busted out on stage in an ill-fitting neon green blouse and baggy white pants and danced the salsa to the Spice Girls’ “Spice Up Your Life,” for which he earned an embarrassingly low score of 12 out of 30.

Clearly unhappy with the score, Spicer took to Twitter afterwards to suggest that he is being punished by the judges for his Christian faith, tweeting: “Clearly the judges aren’t going to be with me. Let’s send a message to #Hollywood that those of us who stand for #Christ won’t be discounted.”

But Hemant Mehta over at the Friendly Atheist notes that DWTS has featured plenty of conservative Christians in the past, including Tucker Carlson, Rick Perry, Tom DeLay, and Bristol Palin, and reminds everyone that Jesus didn’t die on the cross so that Sean Spicer could dance without ridicule on network television.

“At least give Spicer credit for one thing,” Mehta writes, “We now have a new reason to reject Christianity.”

This is what life is now. #DWTS @seanspicer pic.twitter.com/heFCEwfjfT

With Sean Spicer back in the news today, a flashback to the moment when it became clear that the Trump administration was going to be the stuff of dystopian novels pic.twitter.com/in80iC7OQ1

I refuse to watch Sean Spicer's stupid dance. A nazi in a flamenco shirt is still a nazi

It’s possible Jesus has not taken the wheel here. pic.twitter.com/NPc20u3ZMB

sean spicer looks like what would happen if you put a fascist in a lime green shirt pic.twitter.com/TU3vWw3wKk

This whole thing with Sean Spicer isn't cute. Fuck the people promoting and normalizing him.

Because I know ALL of you want to hear my take about Sean Spicer:

I love bad dancing and corny costumes as much as anybody, but the joke is on us. pic.twitter.com/xMei1fiJ2H

You’re on this show because you stood up for a serial adulterer and lied endlessly for him in exchange for pay and power.

Christ had nothing to do with it.

Who did it better??? ????#SeanSpicer pic.twitter.com/0SxgpLUSny

FFS, I did not, and do not watch DWTS, but I saw the clips this am – all Sean Spicer needs is a pineapple on his head, and Trump will mistake him for Carmen Miranda and try to deport him.