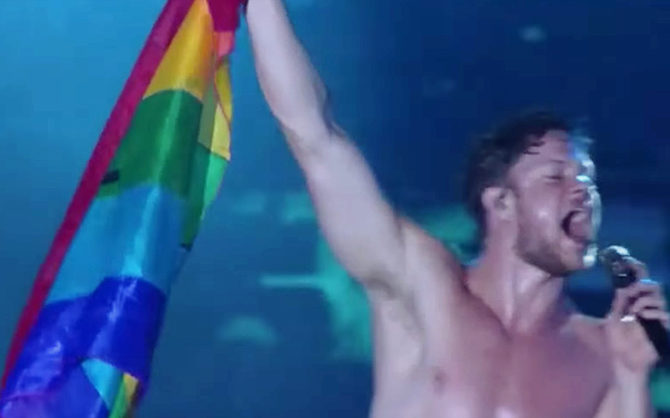 At a concert over the weekend at the Lollapalooza Brazil Festival, Imagine Dragons frontman Dan Reynolds waved a rainbow flag for the massive cheering crowd.

Reynolds isn’t the most obvious LGBTQ ally, and that’s what makes him such a great one.

The musician grew up in the LDS church and still considers himself a Mormon, and that led many fans to assume he has an antigay viewpoint.

Nothing could be further from the truth, and in recent years, Reynolds has become one of the most vocal high profile allies to LGBTQ causes in music.

Speaking to Billboard about why he’s taken such a loud and visible stance, he said:

“One of the reasons I’ve felt such a need to speak out on this is I’ve gotten countless emails and letters from fans around the world who said, “I’m gay, but I know you’re Mormon so that probably means you don’t accept my lifestyle, but I love ‘It’s Time’ and your music.

That was devastating and it broke my heart to get letters like that. I’ve written back to these people to tell them, “No, I do support you and I’m here for you.”

goodnight only to a legend aka dan reynolds pic.twitter.com/9X0M1iDj8S

And his support goes beyond waving a flag.

His upcoming film, Believer, follows the performer as he embraces his role as an advocate for LGBTQ Mormons, who still face pressure from parents and the church to conform to heteronormative expectations or be shunned.

“To be gay is beautiful and right and perfect—to tell someone they need to change their inner-most being is setting up someone for an unhealthy life and unhealthy foundation.

I know a lot of Mormon youth who are gay and hide it because they feel as though God hates them or God is judging them. In Utah, the number one reason for death among teenagers is suicide.”

Believer premiered at Sundance in January, where it received a standing ovation. It will be aired on HBO later this year.

Check out a clip below: