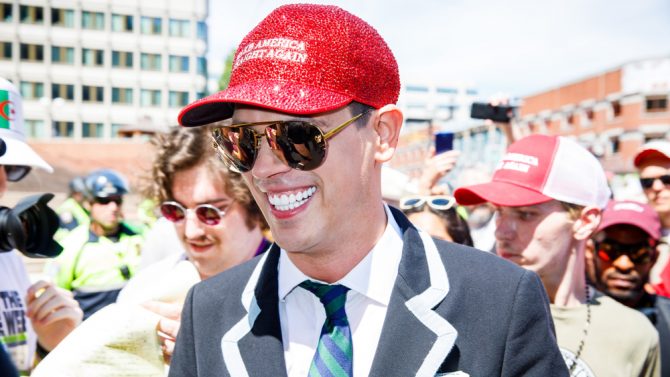 “Ex-gay” activist Milo Yiannopoulos is taking his side show to Penn State next week for a “Pray The Gay Away” ceremony.

The event, scheduled for November 3, is being hosted by the student hate group Uncensored America, which was created last year “to empower young Americans to fight for free speech in order to make American culture free and fun again,” according its website.

According to the event’s page, the “ex-gay global political sensation” will talk about everything from free speech to conversion therapy to hair style. Tickets range from $15-$55.

Many students and faculty have voiced their opposition to Yiannopoulos speaking on campus, but school officials say First Amendment protections prevent them from canceling the circus act.

Students now plan to protest, but school officials are encouraging them to stay home, saying a protest “will only ensure the national attention a provocateur craves.”

Instead, if you oppose bigotry, misogyny, transphobia, and anyone who is determined to make their living by dividing us, make that opposition known by uniting against Yiannopoulos in the most effective way possible — by ignoring him.

Meanwhile, the university’s College Democrats issued their own statement, saying, “The College Democrats at Penn State stand with LGBTQIA+ students. We condemn both Yiannopoulos for his actions, and the Penn State Administration for allowing this event to occur on our campus.”

Milo announced he was “ex-gay” and “sodomy-free” back in March, saying his husband, John, whom he married in 2017, had been “demoted to a housemate.” In August, he announced he had COVID-19 and was being treated with ivermectin. He is currently preparing to open a conversion therapy clinic for men Florida.