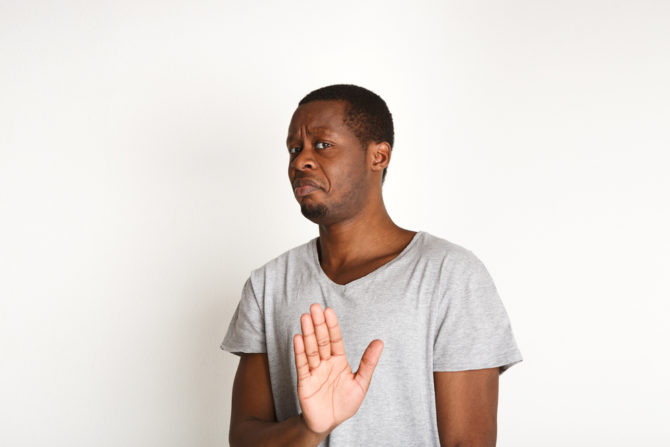 Platitudes like this, Jeremy Helligar says, have “become the bane of my gay existence, words I’ve come to expect every time I log onto a dating/hook-up app.”

In a new op-ed, Helligar shares a screenshot of an actual message he received on Scruff: 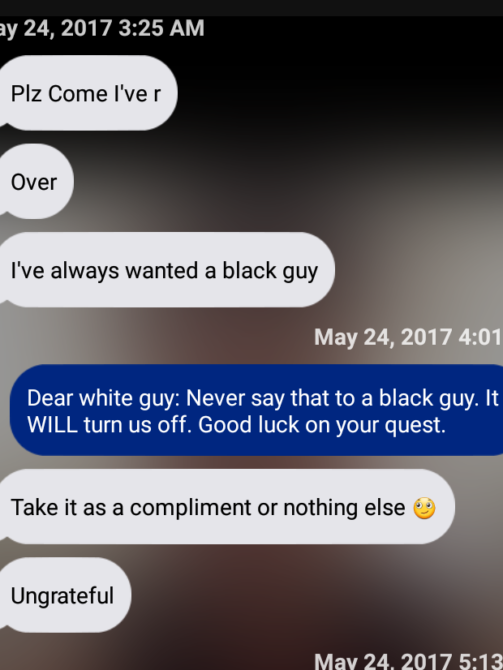 “Usually, the sender is white or Asian, but occasionally he’s Latino, Middle Eastern, or some other racial/ethnic qualifier besides black,” Helligar writes. “I guess the authors of said sentiments expect me to be grateful I’ve gotten their attention.”

But don’t expect him to jump for joy. Why not? Because, Helligar says, commenting on his race isn’t a compliment.

Yes, I may be black, but I’m also gay and tall and American. Oh, and I’m a man. If someone says, “I love American men,” or, simply, “I love men,” I wouldn’t automatically accept it as a personal compliment. Should I? My skin color, like my sexual orientation, my height, my nationality, or a woman’s age, might help categorize me, but it’s too broad to define me or even describe me in any specific, meaningful way. In the context of Grindr/Scruff, “I love black men/c*ck” is gratuitous and pointless. If someone messages me, he obviously like what he sees. Does it really matter how he feels about black in general?

Helligar says he’d much rather be singled out for qualities that don’t have anything to do with his race–his eyes, his smile, his wit, his sense of humor, that sorta thing. Anything but the color of his skin.

If I were white and someone said, ‘I like white men,’ would anyone expect me to take that as personal flattery and be grateful? That’s a rhetorical question. The general consensus is that there’s too much variety among men of European descent for one “compliment” to apply to them all.

But when you’re black, or Asian, you’re presumably interchangeable with all other black or Asian men. You get lumped in with everyone in your ethnic demo, for better (“Black don’t crack,” “Black guys are hung,” etc.) or for worse (“All black men are dangerous,” “I’m not attracted to Asian men,” etc.). Either way, we lose, because we lose our individuality. We merely represent the group and vice-versa. It’s like whoever is doing the stereotyping, or the “complimenting,” hasn’t seen anything beyond color and ethnicity.

Related: Man shares the appalling racist messages he received after chatting with a guy at Pride