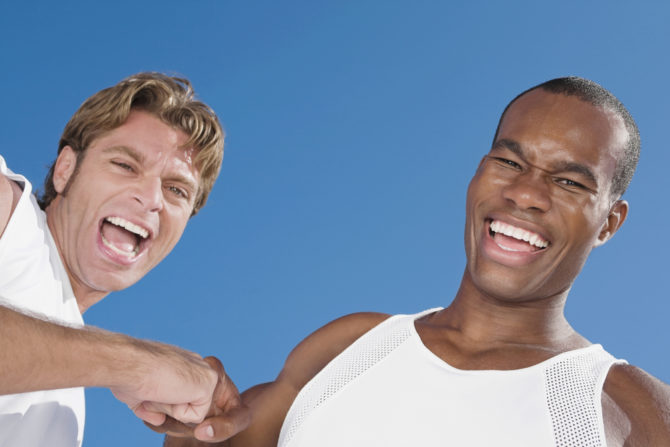 A new Reddit threads asks the question: Why do straight guys joke about gay sex so much?

I’m sure this has been brought up before, but I’m curious: do any other guys think it’s so weird how often “straight” masculine men make jokes about cuddling, making out, giving each other blow jobs, f*cking each other in the ass, etc.? I mean, I totally used to do it, too, before I was aware of my wonderful and diverse sexuality, but now that I’m aware of and embracing of my bi-ness, it just seems so . . . out of place. How does everyone else feel about it/ deal with it?

Let’s check out some of the responses…

“For some, it’s a form of trolling,” one person writes. “The goal is to get your male friend to lose their cool without actually hurting them … If they are weird about sex or emotional intimacy with other men, then the jokes head in that direction.”

“It’s an uncomfortability thing,” another person adds. “I think it’s because being f*cked by a guy is the most psycho-physically vulnerable position they could imagine and it makes them feel uncomfortable and a lot of people deal with that stuff with humor.”

Some people say cracking gay jokes is a positive thing:

“I think that it helps to normalize homosexuality,” one person explains. “Sure some people go to far and are just bigoted, but some people also go to far the other way and just can’t take a joke.”

He adds, “Making homoerotic jokes with my male friends helped me to realize that I was bisexual in the first place. When they still felt comfortable to make the same type of jokes with me and be the same people around me after I came out to them I felt really accepted and loved.”

And a third person says: “Honestly is everyone going way to in depth with this. … Straight boy humor doesn’t have deep set psychological background, it’s just straight boys being straight boys.”

Others feel it’s the symptom of repressed homosexual desires:

“Honestly it likely has to do with being uncomfortable with some part of their sexuality that isn’t 100% straight,” one person pontificates.

“Because they’re so uncomfortable with their sexuality that they have to make everyone around them uncomfortable by being a blatant homophobe,” another adds.

“Sexual ‘victor’ over another man is seen as a greater victory than that over a woman,” a third person writes. “It’s because men value men more than women according to patriarchy. Sex and Power. Read Foucault.”

Then there’s this little gem: “Straight guys are so weird sometimes. Particularly the ‘bro’ kind.”

Why do you think straight guys joke about gay sex so much? Share your thoughts in the comments section below…