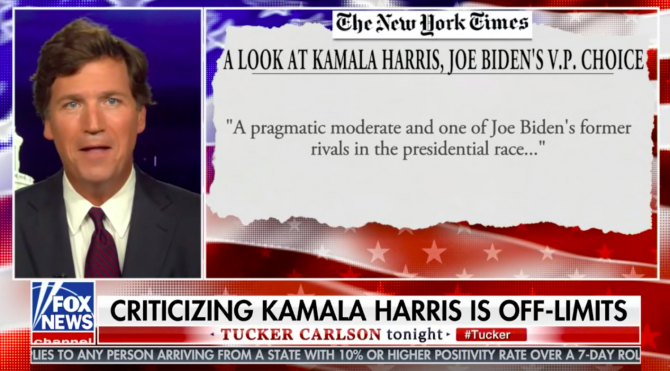 On Tuesday evening’s show, Carlson had a little freakout after one of his guests, political consultant Richard Goodstein, corrected his pronunciation of Democratic vice presidential candidate Kamala Harris’s first name.

“Tucker, can I just say one quick thing because this is something that will serve you and your fellow hosts on FOX,” Goodstein politely said. “Her name is pronounced ‘Comma’ — like the punctuation mark — ‘la.’ ‘Comma-la,’ OK?”

Carlson did not appreciate being corrected.

To which Goodstein replied, “I think out of respect for somebody who is going to be on the national ticket, pronouncing her name right is kind of a bare minimum.”

We have to agree. Properly pronouncing the name of the first woman, first Black person, and first Asian American person to run as this country’s VP is the “bare minimum” anyone can do when talking about her historic candidacy.

But Carlson doesn’t seem to agree.

“So I’m disrespecting her by pronouncing her name unintentionally?” he quipped. “So it begins! No I’m not! You’re not about to criticize ‘Ka-MAL-a’ Harris or ‘CAMEL-a’ Harris or whatever!”

Just for the record, being corrected after mispronouncing a person’s name is not the same thing as being told you can’t criticize them for their policy ideas or political philosophies.