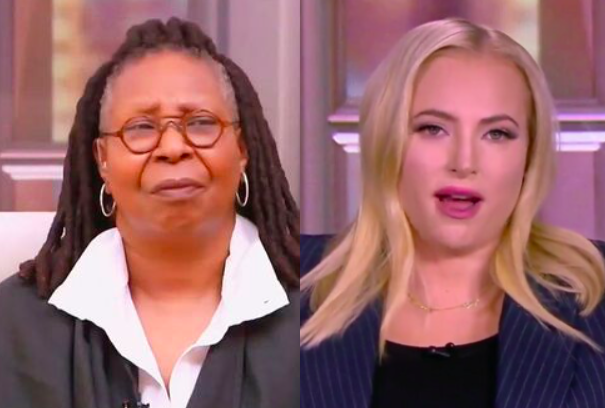 John McCain’s daughter, Meghan, has outdone herself yet again and perhaps nobody is more over it than Whoopi Goldberg.

This morning, McCain went on a truly bizarre rant about how she, Meghan McCain, co-host of The View, thinks “monarchies are stupid.”

McCain used her time during the panel discussion to talk about her childhood playing George Washington with her siblings while touting the McCain family legacy of fighting in the Revolutionary War. While she eventually segued into an info dump on the popularity of Prince William and Kate Middleton and how some British citizens find Prince Harry and Markle’s interview to be poorly timed due to Prince Philip’s failing health, McCain returned to her rant about the proud American tradition of toppling monarchies, which she called “stupid.” It was all very weird, and yet very in character for McCain, who tends to make every topic about her.

“I do not want to defend the monarchy,” McCain said. “I’m a red-blooded 100% American who celebrates freedom anyway I can.”

She concluded her soapbox diatribe by spewing some more barely coherent nonsense about how Meghan Markle and Oprah Winfrey are “single-handedly finishing what George Washington and our revolutionary counterparts did” (huh?) and that she is “all for it.”

And then came Goldberg’s reaction.

? I am WHEEZING at this Whoopi Goldberg reaction to Meghan McCain. pic.twitter.com/y8dwe39DRy

Goldberg’s response quickly went viral on social media. Within minutes, both “Whoopi” and “The View” were trending on Twitter.

Whoopi had no idea what Meghan McCain just said ? #TheView

Meghan McCain is really the Piers Morgan of the View if you think about it. #TheView

It’s 2021 and we are all Whoopi. pic.twitter.com/SncHJPxHTW

I can't imagine achieving as much as Whoopi Goldberg has, after decades of hard work and acclaim, to finally be given a comfy position as host of a morning talk show, only to find out you have to listen to Meghan McCain the entire time you're there.

Since #TheView is still trending, I would like to share this view or Whoopi gathering Meghan McCain.

The way Meghan McCain really think she serves every morning is hilarious.

#TheView Whoopi is back to fully medicated due to a certain coworker. pic.twitter.com/5MfNtKUuxj

Whoopi treating Meghan McCain like the pathetic joke that she is was the highlight of The View. She theoretically whoops that ass everyday.

Whoopi is not here for John McCain's daughter (aka Me, Me, Me) today & I'm loving every second of it ?? #TheView pic.twitter.com/eYDGHGxxHY

whoopi is the hood cashier who need to go on her breakpic.twitter.com/xLEs3BpK7G