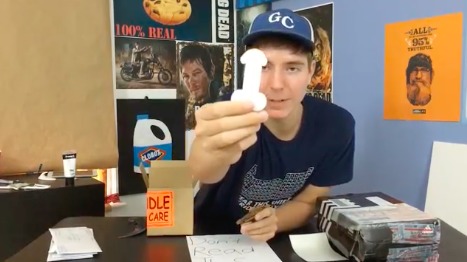 This is why we can’t have nice things…

Jimmy is a 20-year-old YouTuber who goes by the alias “MrBeast”. Over the past year, he’s developed the nickname of “YouTube’s biggest philanthropist” for giving away massive amounts of money to random people.

To date, Jimmy has donated more than $500,000 to everyone from Uber drivers, to waitresses, to random people in parking lots, all of which he’s shared with his over 5 million subscribers on YouTube.

Jimmy has kind of of a homophobic past. And a not-so-distant one either. He was still dropping antigay slurs on Twitter just a few months ago. All of which went seemingly unnoticed… until now.

Taylor Lorenz at The Atlantic reports:

Jimmy regularly uses the notion of being gay as a punchline and treats the word like a slur, hurling it at people or things he’s attempting to diss. “Windows is gay,” he tweeted regarding his frustration using the operating system in December 2015. More recently, in December 2016, he responded to a tweet saying “I don’t have a printer fag.” Just this past December, in 2017, he replied to another person on Twitter, “STFU fag.”

When The Atlantic approached him for comment on its story, Jimmy replied by saying he’s “just a dumb kid that makes YouTube videos.”

Then he cut the call short, hung up the phone, and promptly scrubbed his Twitter account of all antigay language.

Of course, he’s hardly the first YouTuber to be caught up in a homophobic scandal. Last November, massively popular British YouTuber Zoella was has to issue an apology after she was outed for mocking gay men on Twitter.

Despite being exposed as a homophobe, Jimmy continues making videos and raising money. Two weeks ago, he celebrated his birthday, tweeting: “I’m 20 years old now, one of these days I’ll stop being an idiot.”

I’m 20 years old now, one of these days I’ll stop being an idiot. pic.twitter.com/HZlSFLXZuZ