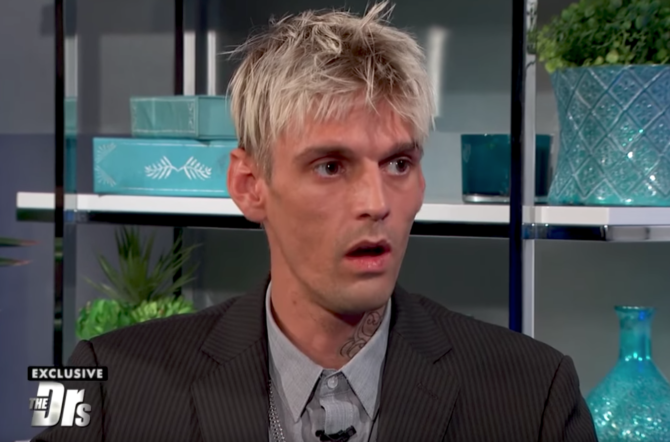 We’re not exactly sure why freshly out bisexual singer Aaron Carter chose to go on television to learn his HIV status  — can someone be in that much need of attention? — but his appearance on The Doctors did reveal it and so much more.

In a clip posted by the TV show under the highly-problematic titled “Aaron Carter’s HIV Test Results Revealed” (Seriously, someone’s status is not a cliff-hanger plot twist), the younger brother of Nick Carter learned that he is negative. The entire segment was called “Aaron Carter’s health crisis!”

Through tears he opened up about the fact that his weight has plummeted in recent weeks, and that, combined with some risky sexual behavior, had him oh high alert that something was wrong.

“That was the scariest thing I have ever done in my life,” he told hosts.

“After not getting annual checkups and testing and being safe, actually, being safe so I could be safe for others, more importantly.

“That’s what scared me. I felt like I was putting people at risk with my body… I didn’t have the courage to go face the music.”

And while his results did come back negative, it turns out he’s right to be gravely concerned about his health.

Carter spoke candidly about becoming addicted to prescription drugs and cosmetic surgery, and the hosts had some stern warnings:

“You are malnourished, and your body mass index at 17 is in a scary range,” Dr Stork told him.

“We can’t just sit here and blame it on a hiatal hernia. We have got to work on this.”

It appeared Carter wasn’t quite ready to make any huge changes, though.

“I get fillers. Restylane, Voluma, Rejuviderm. I get all three, and I’m going to continue doing it,” he said.

“It makes me smile in the mirror,” he says.

You can find more of the appearance below:

He also took a drug test to counter rumors that he takes meth: