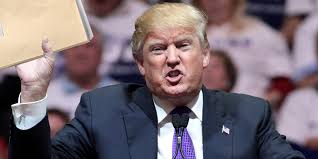 How much credence should be given to Trump’s well-documented, unambiguous promise to overturn Roe v. Wade?

A Washington Post op-ed published on Wednesday serves up troubling food for thought on the issue.

In their own words, they represent…

…the organizations that won leading Supreme Court cases in recent years on sexual and reproductive rights: Obergefell v. Hodges in 2015, which secured legal protections for the marriage of same-sex couples, and Whole Woman’s Health v. Hellerstedt in 2016, which struck down Texas’s attempt to use sham health regulations to shut down 75 percent of the state’s abortion clinics.

The piece focuses on Trump’s assertion that Roe v. Wade “would be reversed” and his offhand remark that marriage equality is “law” that was “settled in the Supreme Court — it’s done”:

Was this a tactic to divide and conquer? To throw under the bus the tens of millions of American women who have had an abortion and hope marriage equality supporters would stand by in silence?

Emphasizing that a court couldn’t possibly reverse the decision to make legal abortion available or effectively halt marriage equality, Northup and Tiven reaffirm that these rights are “firmly rooted in the 14th Amendment’s promise that there is ‘a realm of personal liberty which the government may not enter.’”

As far as Trump’s Supreme Court nominee is concerned, Northup and Tiven emphasize that it’s essential the Senate Judiciary Committee knows whether Judge Neil Gorsuch “stands with precedent and with each of us.”

Given the president’s promise to take our rights away, we must ensure that full, detailed questions are asked of this nominee and that we get the answers we deserve. We will not allow ourselves to be divided. The rights of all here in this nation — not just women, not just same-sex couples — depend on our vigilance.

The very reasonable fear here is that if Trump is successful in undermining Constitutionally-backed reproductive rights, an unprecedented Pandora’s box of government interference opens that threatens the private lives of citizens, and in particular LGBTQ people, who remain a highly vulnerable community.

The excellent piece, which we recommend reading in full, can be found here.