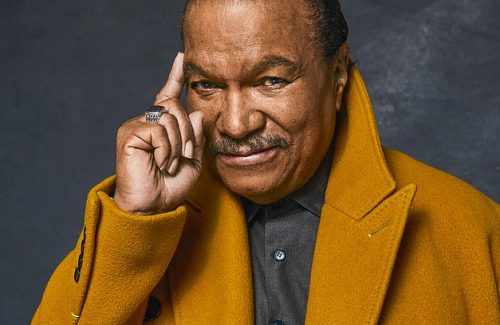 Actor Billy Dee Williams is living proof that gender fluidity isn’t just something invented or embraced by younger generations, as some naysayers like to claim.

In an interview with Esquire, the 82-year-old, who is currently promoting his new film Star Wars: The Rise of Skywalker, said he uses both masculine and feminine pronouns to describe himself.

“I say ‘himself’ and ‘herself,’ because I also see myself as feminine as well as masculine,” Williams explained. “I’m a very soft person. I’m not afraid to show that side of myself.”

Williams first played Lando Calrissian 1980’s Star Wars: The Empire Strikes Back. He is reprising the role in the Star Wars: The Rise of Skywalker, which will be released later this month.

In 2018, Donald Glover portrayed a young Landon in Solo: A Star Wars Story and caused a stir when he talked about the character being pansexual.

Williams also spoke to Esquire about breaking other sorts of barriers.

Recalling his performance as Gale Sayers in the 1971 TV movie Brian’s Song, for which was received an Emmy nomination, he explained, “It was a love story, really. Between two guys. Without sex. It ended up being a kind of breakthrough in terms of racial division.”

He also discussed attending Disney’s D23 Expo last summer, where he spent time with the Rock and Jamie Foxx, both of whom said they owed their careers, in part, to the character of Lando.

“The Rock calls me the OG,” Williams said. “What I presented on that screen people didn’t expect to see. And I deliberately presented something that nobody had experienced before: a romantic brown-skinned boy.”

The response to Williams’ coming out as gender fluid has been overwhelmingly positive. Here’s what people are saying…

Billy Dee Williams comes out as non-binary and gender fluid. So good to see a Black elder living her /his authentic life. ?? https://t.co/vNoY9gDUzL

Billy Dee Williams coming out as non-binary is important because it goes against the popular image of non-binary people as young, white and androgynous.

Love to see it. Especially for all those who act like we just sprouted 5 years ago. https://t.co/Rb9UnmRiVO

Billy Dee Williams talking about his preferred pronouns and feelings about his gender identity at age 82 just makes my heart melt. I love this man so much. So happy to be seeing him onscreen again. https://t.co/3jNc56Dnrk pic.twitter.com/AyHnCOpU6k

Shoutout to all the shitbrains who lost their minds over Donald Glover playing Lando as pansexual in SOLO now having to confront the fact that Billy Dee Williams is genderfluid (they’ll, of course, just put their heads in the sand).

How fuckin rad is that, at EIGHTY TWO years old

I missed the news yesterday that the legendary Billy Dee Williams, at 82 years old, revealed that he now identifies as both he and she, depending on how he‘a feeling about his masculinity/femininity. How fucking rad is that? I want to buy that human a beer. ??? pic.twitter.com/s6LjbcrHvj

Billy Dee Williams coming out as gender fluid at 82 years old is arguably the coolest thing he's ever done, and he's fucking famous for being cool.