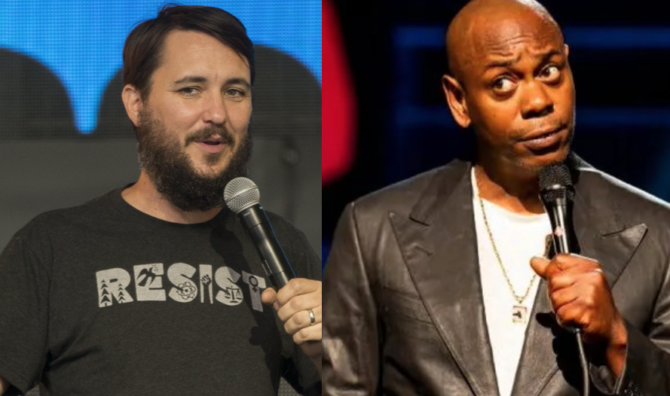 Actor Wil Wheaton has opened up and apologized for his past homophobia in order to emphasize the harm done by Dave Chappelle’s anti-trans rhetoric in the comedian’s latest Netflix special, The Closer.

“For anyone who genuinely doesn’t understand why I feel as strongly as I do about people like Chapelle making transphobic comments that are passed off as jokes, I want to share a story that I hope will help you understand, and contextualize my reaction to his behavior,” the former Star Trek: The Next Generation star wrote in a lengthy Facebook post.

Wheaton goes on to explain how Eddie Murphy’s 1983 standup show Delirious caused him to be “embarrassingly homophobic” during his teen years.

“[The show] had bits that still kill me,” he wrote. “There is also extensive homophobic material that is just f*cking appalling and inexcusable. Long stretches of this comedy film are devoted to mocking gay people, using the slur that starts with F over and over and over. Young Wil, who watched this with his suburban white upper middle class friends, in his privileged bubble, thought it was the funniest, edgiest, dirtiest thing he’d ever heard. It KILLED him. And all of it was dehumanizing to gay men. All of it was cruel. All of it was bigoted. All of it was punching down. And I didn’t know any better. I accepted the framing, I developed a view of gay men as predatory, somehow less than straight men, absolutely worthy of mockery and contempt.”

It wasn’t until Wheaton used the word f*ggot in front of a group of peers — all of whom were gay, unbeknownst to him at the time — that he was confronted with his own, damaging prejudice.

“The room fell silent and that’s when I realized every single guy in this room was gay,” he recalled.

“Do you have any gay friends?’ One of them asked me, gently.

“‘Yes,’ I said, defensively. Then, I lied, ‘they say that all the time.’ I was so embarrassed and horrified. I realized I had basically said the N word, in context, and I didn’t know what to do. I wanted to disappear. I wanted to apologize, I wanted to beg forgiveness. But I was a stupid sixteen year-old with pride and ignorance and fear all over myself, so I lied to try and get out of it.”

Wheaton has had three decades to process and evolve from his teenage ignorance, and he is rightly concerned that Chappelle’s recent jokes punching down at trans people will have a similar effect on many viewers.

“So this stuff that Chapelle did? That all these Cishet white men are so keen to defend? I believe them when they say that it’s not a big deal. Because it’s not a big deal TO CISHET WHITE DUDES. But for a transgender person, those ‘jokes’ normalize hateful, ignorant, bigoted behavior towards them. Those ‘jokes’ contribute to a world where transgender people are constantly under threat of violence, because transgender people have been safely, acceptably, dehumanized.”

“Too many of my fellow cishet white men are reducing this to some abstract intellectual exercise,” he continued, “which once again centers our experience at the expense of people who are genuinely threatened by the normalization of their ‘less than’ or ‘outsider’ status. Thirty years ago, I centered myself and was appallingly hurtful as a result.”