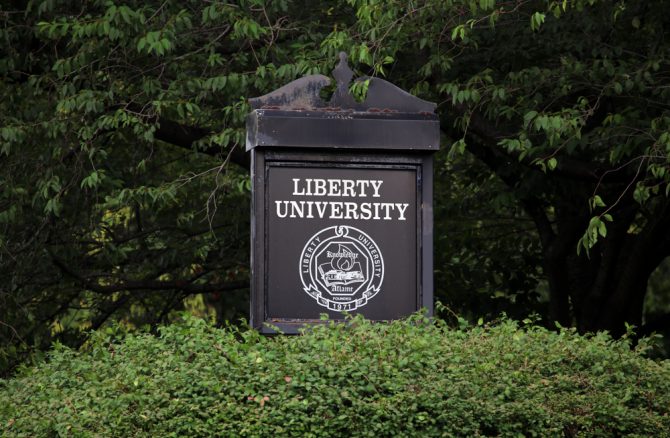 Did you hear that? It was the sound of the final nail being driven into Liberty University‘s coffin.

The evangelical college, which was founded by noted homophobe/televangelist Jerry Falwell Sr., is the subject of a damning new report by ProPublica that claims officials threatened to penalize students who were raped for violating the school’s code of conduct.

It’s the same code of conduct that bans students from being LGBTQ, or being friends with anyone who is LGBTQ, or supporting LGBTQ causes, or having anything other than a negative, hateful outlook toward all things LGBTQ.

ProPublica pored over records from more than a dozen cases and spoke to 50+ former students and staffers about how the school allegedly discouraged and dismissed anyone who came forward with allegations of rape or sexual assault.

In some cases, the students say they were scolded and told they broke the school’s moral code, a.k.a. “the Liberty Way”, by doing things like drinking or simply “being alone” with a member of the opposite sex. At least two claim they were punished for reporting their assaults. One was fined $500 for alcohol consumption and ordered to attend counseling.

Others say they were instructed not to report their rapes to the police, or never even told they had the option of doing so to begin with, which the school is required to do under the Clergy Act. In some cases, if they did try to filing charges against their attackers, they were allegedly dissuaded by university police officers.

Scott Lamb, former senior VP of communications at Liberty University, tells ProPublica that the school had a “conspiracy of silence” when it came to reports of sexual assault on campus, saying, “Concerns about sexual assault would go up the chain and then die.”

This latest report comes just a few months after a dozen former students filed a lawsuit against the university for allegedly refusing to help sexual assault victims. The students said the code of conduct made it “difficult or impossible” to report sexual violence.

And it comes a little over a year after the school’s ex-president, Jerry Falwell, Jr., and his wife, Becki, were accused of prowling the campus for hot young men, ranking students based on their looks, and allegedly engaging in a sexual relationship with at least one man who was in his early 20s.

It’s hardly surprising that Liberty University discourages reporting of sexual assaults when its ex-President, Jerry Falwell, Jr., and his wife used to prowl the campus ranking students they’d like to have sex with. And Mrs. Falwell sexually assaulted one.https://t.co/gd1RXjG3Ld

Liberty University is a cesspool of rapists.

Every time I see someone who feels “blessed to receive an offer from Liberty University.” Gross. pic.twitter.com/OJdm60VxTx

That news about Liberty University is, uhh, yup. That happens.

"There had to have been a moment- the two of you naked together- where you knew this was a bad idea."

^that statement- from the dean of students, to me- has lived rent-free in my head the last 15 years.

So how many Liberty University grads were in the Trump administration again?

Liberty University has been bad, today is no exception.