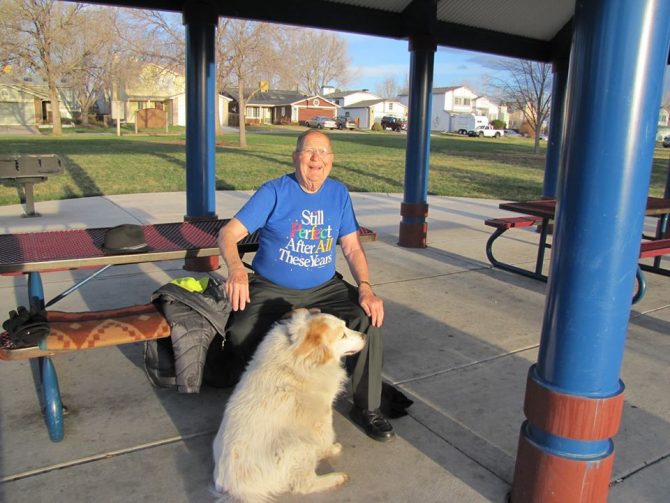 This profile is part three of Queerty’s 2020 Out For Good series, recognizing public figures who’ve had the courage to come out and make a difference in the past year, in celebration of National Coming Out Day on October 11.

Bio: Born in Missouri, Kenneth Felts grew up moving all over America courtesy of his father’s railroad job. When he reached adulthood, Felts settled in Colorado where he took a counseling job with the Colorado Division of Rehabilitation. Along the way, he married, had a daughter named Rebecca, and divorced. Now long since retired, Felts enjoys tending his garden and hanging out with his family, especially his grandchildren. Earlier this year, the COVID-19 pandemic stymied Felts’ social life, so he began writing his memoirs. It was then that he had to face a lifelong secret.

Coming Out: From the age of 12, Felts knew he was gay. “Coming out in the ’50s, ’60s, and ’70s was horrendous,” Felts told The Denver Post. “That was part of the reason I didn’t ever consider coming out. There was no gay community, there really weren’t gay organizations or anything. People who came out, came out on their own, without support. And I guess I didn’t have the courage to face society at that time, so I just went ahead and buried it.”

Felts kept the secret hidden from everyone, including his own daughter, who came out as a lesbian herself. Then this June, Felts happened to mention his love affair with a man named Phillip to Rebecca. He confessed that he regretted ever leaving Phillip, as the two had fallen madly in love. At the time, however, Felts thought it wiser to stay in the closet, to try and suppress his sexual orientation. Telling Rebecca about Phillip made Kenneth feel so liberated, he went to his Facebook profile and decided to come out to the world.

How My Family Grew: “I’ve been in the closet all my life — deep in the closet, behind rows and rows of clothing. I’m way back there,” Felts The Post. “Opening that door at the front, I had great trepidation as to what people would say. I was very concerned because I needed people and I couldn’t stand the thought of losing them just because I decided to finally be who I really was.”

Lucky for Felts, his coming out received an overwhelmingly positive response from his friends and family. He celebrated by hanging the Pride flag outside his home for all to see. His Facebook post, and his subsequent profile in The Denver Post, brought Felts national attention. More importantly, though, coming out strengthened Felts’ bonds with his family, in particular, his daughter, Rebecca. It also inspired others to come out of the closet. “Don’t underestimate your friends and family,” he said. “You might be surprised at how they react if you were to decide to come out. Enjoy what you’ve got while you’ve got it because you’ve only got it once.”

“He’s just so brave and he doesn’t even realize that he is, but it’s extraordinary,” Rebecca said.