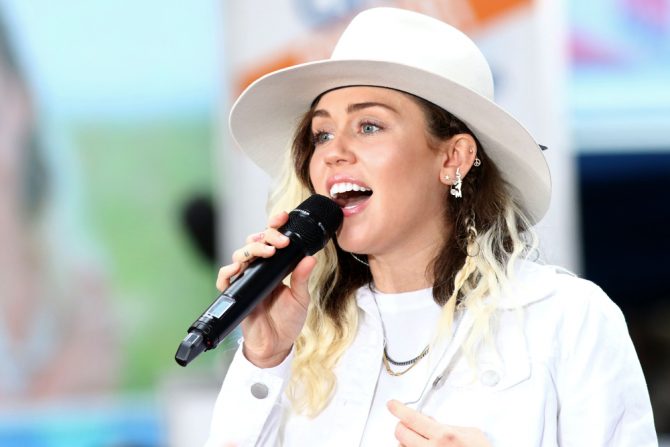 Picture it. Kim Kardashian splits with her husband Kanye West and almost immediately rebounds with, say, Eminem. After several weeks of intense tabloid coverage, Kardashian posts an Instagram livestream video with a message to her fans.

“Don’t stop believing,” she says. “There are good white men out there. I used to think, Once you go black, you can’t go back, because all white guys were evil. But I was wrong. You don’t have to go black. You just have to find a good white guy. I found mine. So can you.”

Imagine the outrage that would follow. It probably would lead to a backlash of Roseanne Barr proportions, possibly even resulting in the swift cancellation of her E! reality series Keeping Up with the Kardashians — and deservedly so. No one has ever accused Kardashian of being particularly woke or enlightened, and I still couldn’t imagine her saying anything quite so tone deaf.

So what was Miley Cyrus, an artist who promotes herself as the ultimate socially aware superstar, thinking when she suggested that lesbianism is merely a reaction to douche-y straight men? I rolled my eyes and kept the judgment to myself as she went from husband Liam Hemsworth to flaunting revenge fling Kaitlynn Carter to flaunting revenge fling Cody Simpson (poor Liam). After all, newly single girls just want to have fun. Fair enough.

Then on October 20, she lost all of the goodwill I was wasting on her when she posted a livestream video on Instagram with Simpson in which she said:

Naturally, backlash ensued — though, of course, not of Roseanne Barr proportions because it’s apparently more acceptable to make harmful statements about sexual orientation than it is to make them about race. And naturally, Cyrus offered one of those lame, predictable celebrity non-apologies on Twitter.

“I was talking sh*t about sucky guys, but let me be clear, YOU don’t CHOOSE your sexuality,” she wrote. “You are born as you are. It has always been my priority to protect the LGBTQ community I am a part of. Happy Monday!”

Her clarification, just like the video that made it necessary, shows that Cyrus, for all her declarations of queerness, doesn’t quite get it. Women gripe about “sucky” guys all the time without bringing sexual orientation into it. Hasn’t she ever watched The Golden Girls or Sex and the City?

She is not just another attention-seeking starlet who spoke out of turn. Cyrus, like Lady Gaga and Madonna, has deliberately positioned herself as a spokesperson for the LGBTQ cause. She identified herself as “pansexual” before many people even knew what that meant. Earlier this year, she said she and her soon-to-be-ex-husband were “redefining … what it looks like for someone that’s a queer person like myself to be in a hetero relationship,” as if marrying one of Hollywood’s hunkiest — and straightest — movie stars was some revolutionary and unprecedented act.

As tempted as I am to wave it all off and say, “She’s just a silly 26-year-old who misspoke,” I can’t let this go that easily. By so publicly and cavalierly suggesting that lesbianism is the reaction of angry heterosexual women to “evil” heterosexual men, she not only fueled the anti-gay arsenal of any homophobes who were paying attention, but she also showed a complete lack of regard for the complexity of sexual orientation.

Being gay is not a reaction to emotional trauma — or to a horrible experience or horrible experiences with the opposite sex — but now, it seems, that can of worms is open. While discussing Cyrus on the October 21 episode of The Talk, co-host Marie Osmond talked about being sexually abused as a child and how it led her to question her own sexuality.

“When I was 8 or 9, I actually thought I was gay,” she said. “And the reason is because I had been sexually abused to the point that men made me sick. I didn’t trust them. I didn’t like them.”

I held my breath while listening to Osmond’s comment and then exhaled. I got it — sort of. She wasn’t suggesting that being sexually abused by a man could have made her gay. She was saying that it made her wary of men in a way that caused her to question her sexuality. To the adult mind, the psychology behind the repulsion she was feeling toward men might seem obvious, but she was so young. She didn’t yet have the tools to make the leap from A to B instead of from A to C.

Miley, though, is a grown woman who has, for years, aligned herself with the LGBTQ community and, some would say, benefitted from it. It’s not enough to say you are one of us, publicly cavort with someone of the same gender, and call yourself “queer.” You can’t just talk the talk and walk the walk when it works in your favor. You have to live and breathe it, too. At the very least, that means being extra-careful what you put on social media.

I’m not saying that Miley doesn’t care about our community. I believe she does. But she needs to think more and show out less. It’s OK if she wants to bait her soon-to-be ex-husband and show him how great she’s doing without him. She’s not the first person to use social media to make that point.

I just hope that in the future, she leaves “gay” out of it.

Jeremy Helligar is a journalist from the U.S. Virgin Islands and the author of the travelogue/memoir Is It True What They Say About Black Men? He’s written for People magazine, Us Weekly, Entertainment Weekly, The Advocate, HuffPost, The Root, and Variety, among many other publications and websites. After spending 13 years living and working in Argentina, Thailand, Australia, South Africa, and throughout Europe, he’s back in New York City, plotting his next move and getting ready to drop his second book.