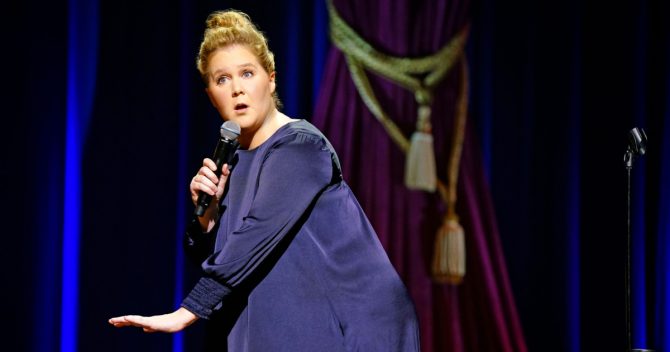 Everyone stop what you’re doing because Amy Schumer has a new comedy special on Netflix.

At one point in the special, the 37-year-old launches into an unfunny rant about gay men who marry unsuspecting women.

“We all have that friend married to a gay guy!” she says.

Schumer also makes a crack about straight men seeming gay if they act too sentimental or romantic, and then makes some stupid remark about how all male costume designers are gay.

But not everyone seems to find Schumer’s gay jokes funny…

Watching @amyschumer on @NetflixANZ who I love and as soon as that grand gesture proposal joke hit… I’m like… really? That’s a gay joke? Wow. ? Are we back in the 90’s? #growing #growinginthewrongdirection

amy schumer: *jokes about if your boyfriend does something special, romantic, or extravagant when proposing to you, he's gay*
amy schumer 30 minutes later: "(men) are raised with so much pressure to be so masculine at such a young age, it's bullshit, it sucks."

My mom started watching the Amy Schumer special and right away my wifi stopped working. It’s a sign that she shouldn’t be watching that trash.

Started watching @amyschumer 's new show on @netflix and stopped when she told gay jokes, like it was an 1995 episode of Friends.

This isn’t the first time Schumer has come under fire for homophobic humor either.

Last December, she, along with Chelsea Handler and Sarah Silverman, was called out by rapper/comedian Nick Cannon for using antigay slurs on Twitter in the past.

Despite repeated criticism over the years for using homophobic slurs and cracking gay jokes, Schumer has never issued any comment or apology for doing so.

She also continues making them.

Schumer may be growing, but she clearly hasn’t grown on this issue.