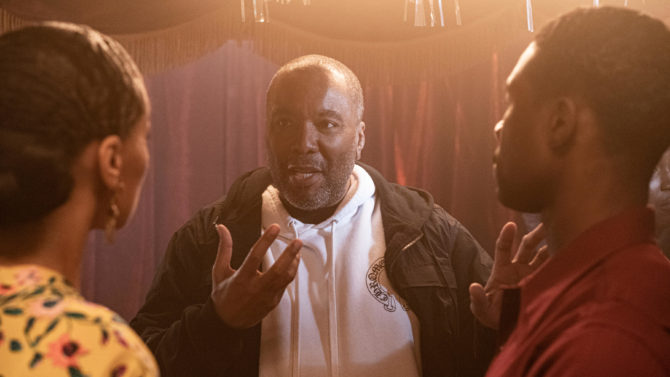 The United States vs. Billie Holiday — Billie Holiday, one of the greatest jazz musicians of all time, spent much of her career being adored by fans across the globe. Beginning in the 1940Õs in New York City, the federal government targeted Holiday in a growing effort to escalate and racialize the war on drugs, ultimately aiming to stop her from singing her controversial and heart-wrenching ballad, “Strange Fruit.” Billie Holiday (Andra Day), Director Lee Daniels, and Jimmy Fletcher (Travente Rhodes), shown. (Photo by: Takashi Seida/Hulu)Move over, Ma Rainey. Billie Holiday has arrived, courtesy of director Lee Daniels.

Cinephiles and Queerty readers will know Daniels as one of the leading openly gay directors in Hollywood.  He burst onto the scene with his film Precious, which scored rave reviews and became a sleeper hit back in 2009. The movie garnered six Oscar nominations, including one for Daniels as Best Director. He since followed up with The Paperboy, The Butler, and created & produced the hit TV musical soap Empire. Daniels’ latest project, The United States vs. Billie Holiday arrives on Hulu February 26.

The United States vs. Billie Holiday sees Daniels takes on a queer, African-American icon. Holiday became a sensation for our her soulful renditions of blues ballads in the 1930s and 1940s, becoming one of the most cherished singers of her day. Her music–and her status as a bisexual African American–also made her a target of the federal government. The movie dramatizes Holiday’s (played by singer Andra Day in her live-action film debut) career woes, struggles with drugs and men, as well as the ongoing campaign by Federal Bureau of Narcotics head Harry Anslinger (Garrett Hedlund) to silence Holiday. With the Civil Rights movement gaining steam in the 1940s and 50s, Holiday’s music, and her song “Strange Fruit” about lynchings of African-Americans in the South, became a battle cry for equality. For Anslinger, destroying Holiday meant the preservation of the racist status quo in the South. Moonlight‘s Trevante Rhodes, Rob Morgan, Miss Lawrence, Natasha Lyonne and Leslie Jordan also star.

We snagged some time to chat with Daniels ahead of the release of the film, the legacy of Ms. Holiday, and the hardest scene he’s ever had to direct. The United States vs. Billie Holiday arrives on Hulu February 26.

Billie is such an intriguing, frustrating character, in that she seems to knowingly—even deliberately—self-destruct at times. Why do you think that was the case?

I think it was about her being born into poverty, being born in a brothel. She was raped at 10 and went to prison for being raped. She was a prostitute. So she was anesthetizing the pain, trying to cure herself with drugs. I think that she was a complex woman, and I think that I’ve caught every moment of her complexity, her layers, her levels. That’s what excited me about telling this story: she wasn’t white & black, it was layers of complexity. That she was able to give us the art that she did for the time that she–“Strange Fruit,” that she did that against all odds. She was an icon and civil rights leader, and I don’t think she ever got credit for that. And does she have a death wish? I think deep down she knew she wouldn’t live to be 44. She was supposed to go when she was 10.

That’s why she lived this way. How do you survive that? I don’t know that I could have.

Makes two of us. For all her contradictions, she’s a woman of intense strength. You drive that point home. Of course, you have help. I am so excited to ask you about Andra Day. This is a woman with next to no acting experience. Now she’s stepping into the shoes of a legend, and following the steps of Diana Ross & Audra McDonald. And she’s carrying a movie. Not every actor, or even every star can do that.

For you as a director, what was it about Andra that convinced you she was up to the task? How hard was it to sell your investors on an untested lead?

Well I’m the producer. My other producer gave me money on the film. I think the studios wanted a lower budget. I couldn’t really get financing from a studio because they wanted to throw me $5 to make the movie. I knew they wouldn’t do it [for a black movie]. You talk about “Oh, systemic racism doesn’t exist in Hollywood?” That’s bullsh*t.

So yeah. I knew there was no one else for the role. I knew she was smart enough to understand that it was important to honor the woman’s legacy. It wasn’t just about acting, it was about dropping deep into the spirit. And was God working in that setting. It was a miracle.

It’s one of the best performances of the year.

Sorry, I’ve been doing this 30 years. It’s one of the most terrific performances I’ve ever witnessed. It’s a birth. She sets a new bar for actors.

You’re absolutely right, and she does her own singing. That’s a whole other level to the performance. On the subject of casting, there’s another actor I need to ask you about. You’re a director known for inspired casting. Mo’Nique in Precious, Alan Rickman in The Butler. And this film is no exception. What is it about Natasha Lyonne that suggested Tallulah Bankhead? I love Natasha, but would never have thought of that casting, and it’s great. Where did you get that?

I love Natasha. What she brought to it was a chicness. She’s powerful. It’s a collaborative effort making movies. So even though I know how to smoke, Natasha taught [Andra] how to smoke. Andra sings, so she’s never smoked before.

What you see on screen is a wonderful collaboration. So Natasha not only served as an actress, but an advisor.

There are several scenes in the film I’m excited to ask you about. One involves sex between Billie and Jimmy, Trevante Rhodes’ character. And it is a scene.

There’s a tendency in movies to be gratuitous with sex to try and titillate the audience, or to show it as a plot point and move on. But this is a scene. We learn something about the characters in the scene, they grow and their relationship changes. But Andra and Trevante are both very naked while all this is happening. How do you go about directing a scene like that which is graphic but emotionally complex?

I was terrified that day. We were behind, and only had 20 minutes to shoot it. I was really concerned for both actors, that I would get them to be comfortable with each other, and that my cinematographer would be comfortable to shoot. We were in a really tight little motel room. And…

I wanted it to be a f*ck scene.

It started out as a f*ck scene. Billie Holiday was a sex addict. So they were f*cking. But halfway though, Jimmy changes her whole thought process as to what love is about. So it shifts.

It’s a scene of raw passion.

It’s beautiful. She realizes he want something else from her that she doesn’t know how to give him. So she’s repulsed by it. Then she realizes what it is, and is swept away. So it’s a love scene at that point.

I love that. And it gets to the heart of what makes the scene so powerful: she learns to love in that moment. The other jaw-dropping scene in this film that gets to the heart of the story, and is something of a crown jewel from a directoral standpoint occurs when Billie happens on the site of a lynching.

It plays without a cut and runs several minutes over various locations. How long does something like that take to block and shoot? More importantly, when you are dealing with something that malignant, that evil, how do you find the emotional temerity to get through a scene? How do you get your actors through it, especially when they can’t stop?

Thank you for that, David. It’s the hardest thing I’ve ever directed.

It is in one take, one shot. And it was emotionally draining. The crew—my assistant director, my production designer, my cinematographer—mapped it out a week beforehand. We had everyone walking through it so they knew what it would be. The actors didn’t really step into it until the day of. And what you see is the first take.

We were in it. I did three takes, and that was the take we used. I think the hardest part for me was watching the kids cry. They genuinely were traumatized by seeing a woman hanging from a tree, and [a burning cross]. God was on my side with that one. We literally got off a bus, and I followed [Billie]. The camera pans around to what she’s seeing. I get chills thinking about it now.

It’s easy to see why.

It’s the most powerful moment of the film. It’s spellbinding sir.

So last question. You are one of the few openly gay African American directors in Hollywood. So where do you go from here? What story are you dying to tell?

Someone asked me what gay story I want to tell. And it’s true: I’ve explored everything. I explored myself in Jamal’s character on Empire. I’ve given back to black culture. I also want to give back to gay culture. So it’s important for me to do a gay superhero story, and do it right, the way it should be done. I want to do a gay horror movie to scare you sh*tless. Can you imagine a queen trying to fight the devil?

A queen coming for the devil? Or a love story that we’ve never seen before, where in the end of it, we get to see two men walk away together, happy. Normally with these Hollywood stories it’s a tragedy, it’s Romeo & Juliet sh*t. No. I want to see my big ass carried up the stairs at the end of the movie.

The United States vs. Billie Holiday arrives on Hulu February 26.