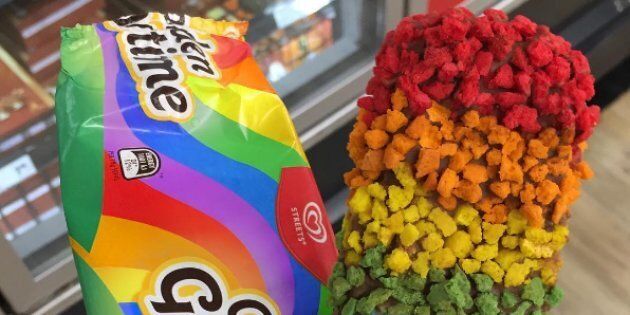 A decades-old brand of ice cream in Australia has suddenly become the target of homophobes and gay activists alike, and sent the nation into an uproar. Organizers have started a petition to force Golden Gaytime ice cream bars to change their name.

Golden Gaytime ice cream first hit the Australian market in 1959, and has remained a popular brand since. Now, a man identified only as Brian Mc, has launched a petition to have the name of the brand changed, as he finds it offensive to gay people.

“In 2021, Gay’s meaning primarily is related to sexuality,” Brian wrote in the petition. “As a Gay man I have needed to fight to be myself, overcoming many things in my life, I am a proud Gay man. As a part of the LGBTQIA+ community, I believe my sexual identity is owned by me, not a brand and that the outdated meaning no longer applies. Isn’t it time for this double entendre to end?”

Related: Australian LGBTQ skydivers come together with pride in a festival first

Brian goes on to note that several other brands which featured racial slurs as part of their brand name have since changed to remove any negative connotations. He also cites the recent choice by Hasbro to release Potato Head as a gender-neutral toy.

At the time of this writing, Brian Mc’s petition has netted over 1,200 signatures with a final goal of 1,500. While the petition has obviously gained some public support, the loudest objections to the petition have actually come from within Australia’s gay community itself. Brian Mc has since turned off comments on the petition, apparently due to negative pushback.

100% whoever started that petition to get 'Golden Gaytime' ice creams renamed because they're offensive to gays is not actually gay but just a troll or a NewsCorp journalist trying to generate outrage and clickbait.

“100% whoever started that petition to get ‘Golden Gaytime’ ice creams renamed because they’re offensive to gays is not actually gay but just a troll or a NewsCorp journalist trying to generate outrage and clickbait,” user @graffekta wrote on Twitter.

Renaming the Golden Gaytime would be homophobic

“Renaming the Golden Gaytime would be homophobic,” objected @cats2019stan.

I think the only reason I ever loved #GoldenGaytime is literally because the name makes me feel both seen and delicious ?

“I think the only reason I ever loved #GoldenGaytime is literally because the name makes me feel both seen and delicious,” said drag performer Vybe.

The account behind the creator of the petition is so eerie: only created this month and nothing but tweets about the petition.

“The account behind the creator of the petition is so eerie: only created this month and nothing but tweets about the petition,” noted user @AJPrincep, calling into question the seriousness of the petition.

As the debate rages on over social media, another queer Australian has actually launched a counterpetition to keep the word “gay” in Golden Gaytime. At the time of this writing, it has garnered more than 1,100–just shy of a hundred less than its counterpart, and in less time. One comment on the counterpetition also calls into question the legitimacy of the anti-“gay” petition, implying it’s actually an elaborate right-wing hoax designed to embarrass the gay community.

“Brian Mc is NOT a Gay man,” accused user Luke Woodard. “He is part of a homophobic reddit community who are plotting to generate anger/outrage towards LGBT+ people by making a fake petitions posing as gay people, this time trying to rename Golden Gaytimes. Don’t let the trolls win! The LGBT+ love gaytimes!”

In response to the uproar, Streets, the company that makes Golden Gaytime ice cream, released a statement.

“The origin of the Gaytime name was and remains related to having a joyous or happy time and was meant to capture the pleasure that comes with enjoying an ice cream,” the statement read in part. “The Gaytime name is not and never has intended to cause offence and your petition is the first that we have been made aware of.”