Oh, And Just Like That, I wish I knew how I could quit you.

Each week, I can’t help but feel equal parts existential dread and childish glee as I fire up the latest episode of the Sex and the City reboot.

What population of people will the show insult this week? I wonder. Which flavor of Snapple will Carrie ruin next? How will the writers do Steve (and Miranda!) dirty this go-around? And, oh merciful God, how many minutes of absolute torture will we be subjected to in the form of one Che Diaz’s “comedy bits”?

But for as much sh*t I talk about the show, I genuinely cannot. stop. watching. Yes, it’s an absolute f*cking ridiculous mess, but it’s my ridiculous mess and I will stan it with unapologetic shame until the day I die.

But you know what’s even messier than the show itself? All the backstage drama that’s plagued And Just Like That since before it even aired! From cast member feuds, death threats, sexual assault scandals, and a bunch of Peloton drama literally no one asked for, we’ve rounded up all the things that have happened behind the camera that’s made us wonder, is And Just Like That actually cursed?

Curse #1: Kim Cattrall wants nothing to do with Sex and the City, thank you very much.

For years, the media speculated whether Kim Cattrall and Sarah Jessica Parker lowkey hated one another. Seriously though, ELLE has a complete timeline of the alleged feud, which, props to ELLE for being a modern day Veronica Mars!

Anyway, in a 2017 interview with Piers Morgan, Cattrall revealed that she was “never friends” with her co-stars, and that she was totally done with Sex and the City. When asked if she would ever play Samantha again, Cattrall bluntly shared, “Not for me. That was part of turning 60. That was a very clear moment of, how many years do I have left and what do I want to do with it? What haven’t I done? I feel that the show was the best when it was the series and the bonus was the two movies.” Hey, self-awareness is important kids, I get it! But also, can I look that good at 60?

In the years that followed (and right up to the premiere of And Just Like That), it seems everyone and their mom was asked about the possible feud, including SJP herself, Cynthia Nixon, Kristen Davis, and Chris Noth… which, yawn, we’re exhausted having to rehash it all.

As you can guess, Kim refused to return for the revival, but at least she seems to know we miss her dearly. Now can we have Samantha back?

Level of dark magic: The curse that started every curse thereafter. You in danger, girl!

Curse #2: But also, Sarah Jessica Parker and Chris Noth didn’t want to do And Just Like That either? 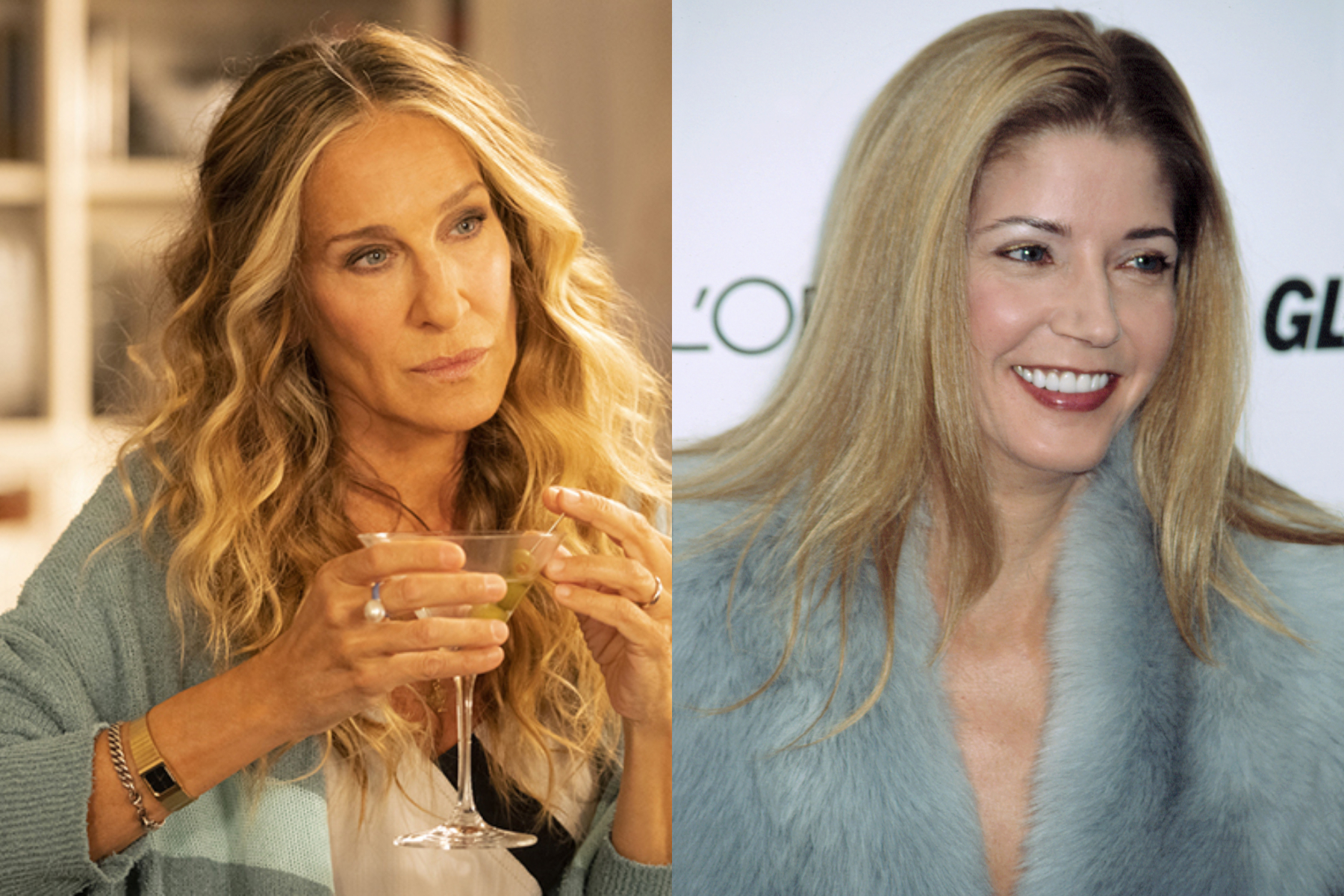 In January 2022, author Candace Bushnell, whose sex and relationship column in The New York Observer inspired Sex and the City, spoke about And Just Like That to the podcast Behind the Velvet Rope with David Yontef. During the interview, she let slip that both Sarah Jessica Parker and Chris Noth were super hesitant about doing the spinoff. And by “super hesitant” I actually mean they really, really, really didn’t want anything to do with it after filming the first episode.

“He didn’t even particularly want to do it either, you know? I mean, he really only signed up to be a guest star,” Bushnell explained.

OK but, like, how does Ms. Candace know SO MUCH about Parker and Noth’s business?! And who in God’s name would suggest Bushnell play the lead role of an already-iconic show when she literally has no acting credits?! I HAVE QUESTIONS. But whatever, it’s fine… moving on!

Level of dark magic: This is like the first two Harry Potter movies, right before sh*t gets dark… harmless.

Chris Noth’s rein of terror on our lives began when–SPOILER!–his character, Mr. Big, died while riding a Peloton bike in the premiere episode of And Just Like That. His character’s demise caused Peloton’s stocks prices to drop significantly. Days later, the exercise company responded by releasing a cheeky ad featuring Noth–only to scrub it from the earth entirely following the reveal that Noth is actually a terrible, disgusting person IRL. (Keeping up? There’s a lot here!)

Case in point: Following the premiere of And Just Like That, multiple women came forward alleging that he had sexually assaulted them. Shortly thereafter, Noth was dropped by his reps and cut from the And Just Like That finale.

Curse #4: People keep sending this And Just Like That writer death threats 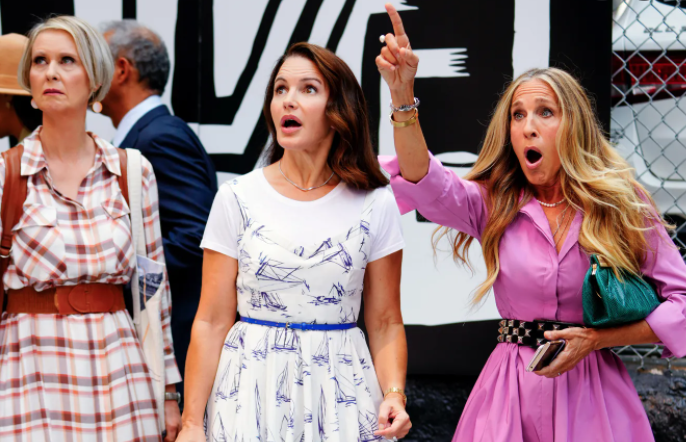 Samantha Irby, a writer for And Just Like That, recently shared how she is hyper-aware of how much people hate the show, and would very much like it if folks stopped sending her death threats, kthxbye.

In an entertainment newsletter to her followers, Irby wrote how she was “a little broken” and “was not ready for the magnitude of discourse there would be,” regarding the show.

i took some protective measures (that some of my friends roasted me for at the time) like getting the f*ck off twitter forever and unfollowing whatever pop culture sh*t i was scrolling past every day to shield my sensitive eyeballs from things that might wound them, but i was not prepared to receive death threats over a fictional character’s fictional relationship choices that are fictional which means not real?

Irby also shared how unsettling it was to read all the “collective loathing” the show has received (we promise not to send this article her way!):

this wild reaction (by which i mean the entire internet’s collective loathing) is also disconcerting because some of it is coming directly to me from people i actually know? i promise you, someone has already sent me that nasty [tweet/article/podcast/blogpost/ransom note] that you were just about to forward to me. i’ve seen them all! they make me feel bad because this was a job i was hired to do and i didn’t take it as a joke!”

At the same time, Irby gets it. But also, she’s a writer with little control over what appears on the show, she said.

you think the show is stupid, i get it. i’m not mad at that, feel what you feel, it’s all valid. you hate it, i like it, we can agree to disagree. but if you think i’m in a fiery car crash you’re driving past in slow motion, you don’t have to pull your car over to ask me ‘hey, how do you like those flames?’ (also i am truly at the bottom of the totem pole that is this gargantuan production, i have no idea why [they] would ever wear [that] in episode [who gives a shit] and you cannot possibly think that i, a person currently stinking up an ll bean jacket worn as a shirt, was in any way consulted about that???? please stop yelling at me, i am powerless over these decisions!!!!!!!!!)

Level of dark magic: Any magic that’s dark enough to make someone get off Twitter is too dark to us. 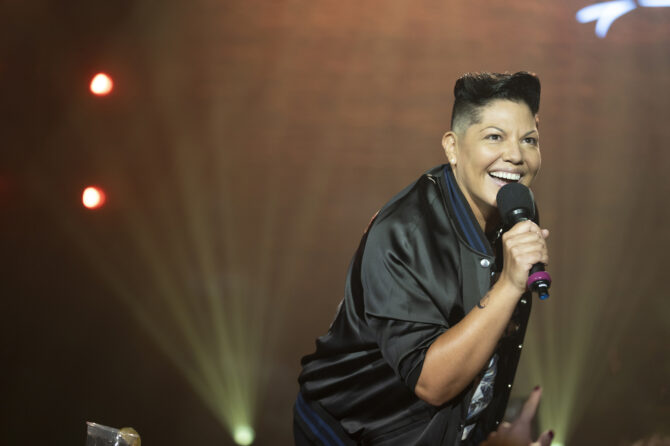 Finally, I can’t reveal my sources, but I have it on good authority that Che Diaz was the product of an ancient curse cast by Kim Cattrall as a final F.U. to the series. No one is safe. There is no remedy or spell to reverse this. I’m so sorry you have to find out this way.

Level of dark magic: There is no hope.