A celebrated teacher at Brigham Young University has landed himself in hot water after referring to a gay student by a Mormon term associated with the anti-Christ.

In now-deleted tweets, Smith defended the church’s casting out of Helfer, labeling her defenders non-believers. Then a gay student and practicing Mormon, Calvin Burke, offered an apology for Smith’s remarks. Burke had also attended Smith’s classes. 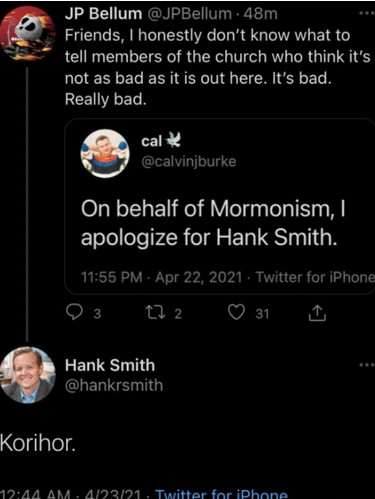 “On behalf of Mormonism, I apologize for Hank Smith,” Burke wrote.

Smith replied, labeling Burke a “Korihor.” For those unfamiliar with the term, Korihor is a character in the Book of Mormon who denies the existence of Christ. The book also labels him a false prophet and anti-Christ. God punishes him by making him mute, and a crowd tramples him to death.

I do need to apologize for calling Cal what I did. I deleted the reply. That was unjustified and unfair. My emotions got the better of me. I am very sorry.

Smith’s remarks invited wide backlash, which prompted him to delete the tweets and issue an apology. “I do need to apologize for calling Cal what I did,” he wrote. “I deleted the reply. That was unjustified and unfair. My emotions got the better of me. I am very sorry.”

Worse, Burke has begun receiving death threats over the exchange. Korihor is also a term used by the alt-right DezNat movement, a group of fundamentalist Mormons that oppose rights for women and frequently target the LGBTQ community for harassment. Members of the group began targeting Burke after Smith’s use of the term. Burke has since made his Twitter account private and declined to comment to reporters.

Brigham Young University remains mum on if Smith’s conduct could result in disciplinary action. Carri Jenkins, a spokesperson for the school, told reporters BYU has “processes in place to address personnel matters. These are handled on a confidential basis.” She also added she “wouldn’t be able to comment on an individual situation.”

According to The Salt Lake City Tribune, no professor has ever faced disciplinary action for harassment of a queer student. On the other hand, the school has a long history of punishing or terminating faculty that defend LGBTQ students.